In 2016, lecturers staged an 18-day protest at Freedom Park, which ended only after they were given assurance by the then-Primary and Secondary Education Minister Kimmane Rathnakar.

BENGALURU: The state government is considering invoking the stringent Essential Services Maintenance Act (ESMA) against pre-university college lecturers who have threatened to boycott evaluation work as a mark of protest.

The evaluation process is scheduled to begin on March 22, and now, the state Department of Primary and Secondary Education is facing a problem after the lecturers threatened to boycott evaluation, which is an important part of their functions. 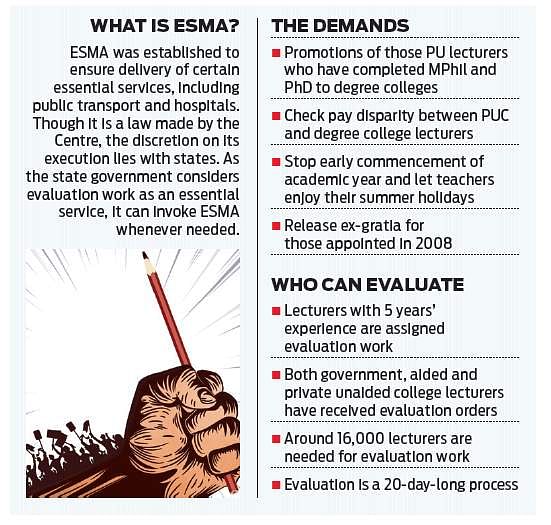 The Karnataka Pre-University College Teachers Association (KPUCT) recently conducted a meeting and announced this boycott and indefinite strike from March 21 on wards, at Freedom Park.
Following this, the department is finding alternate ways to get evaluations done, one of which is invoking ESMA. A senior department official said, “ESMA is one of the alternatives we are thinking of, along with a few other options.”

However, sources said the department will try its best to convince lecturers to avoid boycotting evaluation. “As there is a code of conduct in place, we will try to make them understand that nothing can be announced from the government’s side. We can take the issue before the Chief Minister, who also holds the Primary and Secondary Education minister post, after the LS elections,” the official said.
Reacting to the possibility of ESMA being invoked, members of KPUCTA said the state cannot threaten them this way. “This is not new. Many of us have experienced ESMA and been arrested. We are ready to got to jail again, but we will not be withdrawing our decision until our demands are met,” said Thimmaiah Purle, president, KPUCTA.

In 2016, lecturers staged an 18-day protest at Freedom Park, which ended only after they were given assurance by the then-Primary and Secondary Education Minister Kimmane Rathnakar. In 1998, a massive protest was held, where lecturers boycotted evaluation work for a month and the government had to enforce ESMA. The protesting lecturers were sent to prison.

Now we are on Telegram too. Follow us for updates
TAGS
Karnataka ESMA