Karnataka politicians to sweat it out this summer

If you thought March was hot, think again. Come April, the temperatures are expected to rise by 2 to 3 degree Celsius.

BENGALURU: If you thought March was hot, think again. Come April, the temperatures are expected to rise by 2 to 3 degree Celsius. For politicians and party workers who are campaigning full time for the upcoming elections, this will mean an increased strain on their stamina. 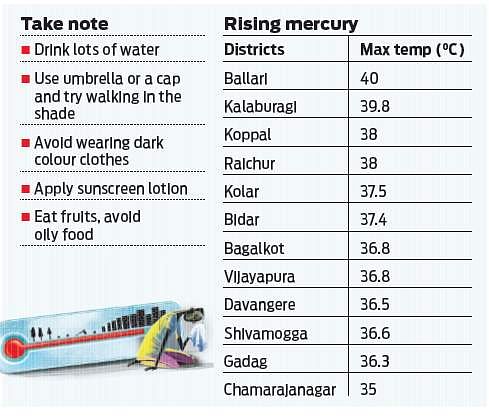 In the second week of March, temperatures have already reached an all time high for the month. While North Interior Karnataka was left scorching at 36 to 40 degree Celsius, the situation was no better in other parts of the state, including coastal and Malnad regions. For the past couple of years, the temperatures have only risen by 2 to 3 degrees at many places, especially Hyderabad-Karnataka region.

KSNDMC Director Srinivas Reddy said, "In April, it could be up to 4 degree Celsius more than normal. This summer will be harsh and it will be worse for people who step out, especially the campaigners."
KSNDMC project scientist and meteorologist Sunil M Gavaskar said that the minimum temperature as well as the duration of the heat during the day have increased. "Earlier during summers, temperatures would increase after 12 noon and would stay the same till 3 pm. But now it has started getting hot at 11 am and this continues till 4 pm,'' he said.

A Congress leader said, "We have to do extra work since it is election time. We usually give white T-shirts with the party logo or candidate name printed on it and a cap to those campaigning. Water bottles will be arranged for all party workers."

Now we are on Telegram too. Follow us for updates
TAGS
Karnataka Karnataka weather