Over 10,500 SSLC students to lose a year due to attendance shortage

Over 10,500 SSLC students have lost one year due to shortage of attendance.

BENGALURU: Over 10,500 SSLC students have lost one year due to shortage of attendance. They ignored repeated warnings by their respective schools to maintain required attendance, and will not be allowed to appear for the Secondary School Leaving Certificate Examinations (SSLC) scheduled to begin on March 21.

As per the list released by the Karnataka Secondary Education Examination Board (KSEEB), 10,572 students are not being allowed to write the exams. Their admission tickets have been returned by the head teachers of the respective schools. 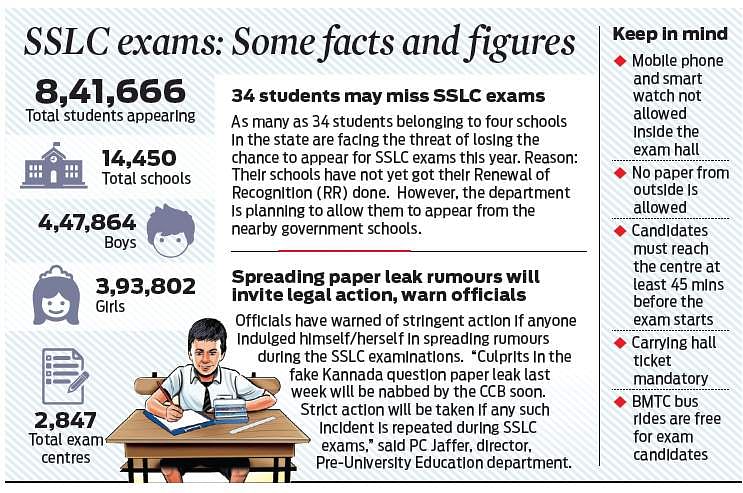 “The activities of students, especially when the children have been irregular to classes, have been updated to the parents from time to time. The list of students was also put up on the notice boards. But despite that, these students ignored attending the classes regularly,” said a senior KSEEB official.
Now these students will have to get themselves enrolled as fresh students next year, attend classes regularly, and maintain the required attendance to be eligible to take the exams.
“The students with attendance shortage will not be allowed to write the supplementary either. They should enrol as fresh candidates for next year,” the official added.

8 lakh students to take SSLC exams
This year, 8,41,666 students are expected to write the SSLC examinations, which are scheduled to be held from March 21 to April 4 at 2,847 examination centres across the state.  The highest number of students registered are from Bengaluru South, totalling 65,451, followed by Bengaluru North at 49,336. Kodagu, with 7,240 students, has the lowest number of candidates, followed by Sirsi (9,736) and Uttara Kannada (9,766). As many as 4,651 students are specially-abled children, who have been given relaxation in choosing a subject. In some cases, instead of mathematics and sciences, another subject has been given as an option.