Wait gets longer for loan waiver

The implementation of farm loan waiver in Karnataka has come to a standstill due to the model code of conduct.

BENGALURU: The implementation of farm loan waiver in Karnataka has come to a standstill due to the model code of conduct. The break in disbursing money has just made the wait longer for farmers, who were already agitated with the slow pace of implementation. The Election Commission of India applied brakes to the disbursal of the waiver into loan accounts of farmers so it doesn’t influence the way beneficiaries vote.

The New Indian Express spoke to farmers and bank officials from across the state to understand what the loan waiver means to beneficiaries in the time of elections and whether it has been impactful.“Some of my friends’ loans have been waived off but I am still waiting. We will get fresh loans only after paying the pending amount. After all, the waiver is only partial. It isn’t like we have no worries now,” said Chikkamayi Gowda, a farmer from Maddur in Mandya district.

He has begun sowing paddy in his two-and-a-half acres with a loan that he took from a friend. Hailing from Mandya — a constituency that is set to see an electrifying fight between independent candidate Sumalatha Ambareesh and JD(S)-Congress candidate Nikhil Kumaraswamy — Gowda said, the loan waiver doesn’t matter to people, when it comes to voting.

With barely Rs 6,223 crore released so far from the intended `46,000 crore loan waiver, it is a long way before the scheme reaches the last of farmers who have applied for the waiver. Sources from the government suggest that the size of the actual waiver may not be as grand as Rs 46,000 crore after all, with issues of multiple loans by farmers from various banks, a cap of Rs 2 lakh per family, mismatch of details on various documents or the mere lack of ration cards or Aadhaar cards drastically bringing the number of beneficiaries down.

The government has come up with its own software to ease the process of verification, identification and loan disbursal but documentation and verification have turned out to be the biggest nightmare for farmers. Applicants are being denied waiver benefits for anomalies as small as interchanged initials and numbers in land records and Aadhaar cards or ration cards. In many districts, banks are still receiving payments for waiver announced by Siddaramaiah in the previous government.

VSSN secretaries are worried of repercussions from farmers whose loans haven’t been waived off yet. “Loans are not being considered for a waiver even for slight mismatches like a change in initials of farmers’ name in their land records and Aadhar cards,” said a VSSN secretary. Lack of ration card is another excuse being used to deny the waiver. 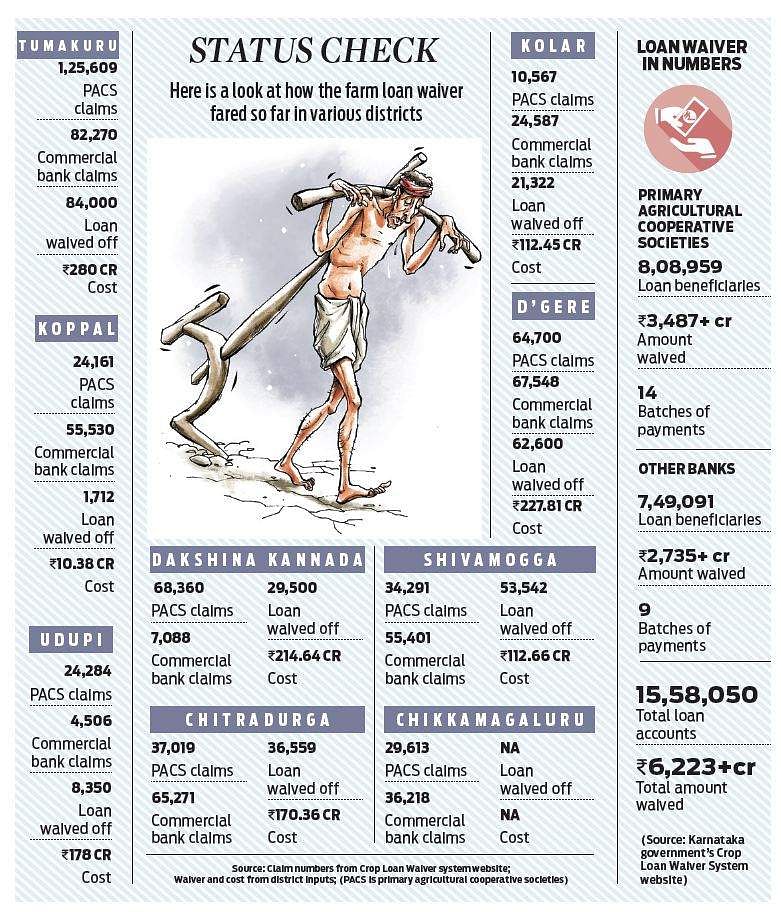