Jarkiholi’s Delhi visit sets off buzz ahead of cabinet rejig

Amid the buzz of an impending cabinet rejig in mid-August, Water Resources Minister Ramesh Jarkiholi landed in New Delhi on Sunday.

BENGALURU:  Amid the buzz of an impending cabinet rejig in mid-August, Water Resources Minister Ramesh Jarkiholi landed in New Delhi on Sunday. Jarkiholi’s visit comes close on the heels of Deputy Chief Minister Laxman Savadi’s trip to the national capital to meet the BJP central leadership. 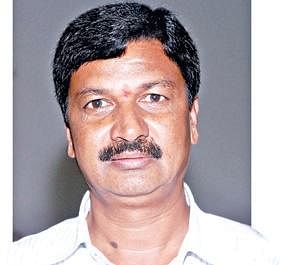 During this two-day stay in New Delhi, sources close to Jarkiholi suggest that the minister hopes to present his case to replace Laxman Savadi as Deputy Chief Minister and lobby for H Vishwanath, M T B Nagaraj and R Shankar to be inducted into the cabinet.

Jarkiholi is making a representation for his compatriots before Chief Minister B S Yediyurappa officially seeks an appointment with the BJP top brass to discuss the cabinet expansion and rejig. The first move by Ramesh Jarkiholi to lobby for a Deputy CM post was when he met Union Minister Pralhad Joshi earlier in July.

Jarkiholi’s hopes of meeting Union Home Minister Amit Shah, however, now seem impossible. “He is scheduled to meet JP Nadda on Tuesday. He was called to New Delhi by the party’s central leadership for a bigger role,” said a source close to the minister.

Not everyone on board with Jarkiholi’s  demands

According to the Jarkiholi camp, Chief Minister Yediyurappa is keen on dropping Laxman Savadi and Shashikala Jolle, both Lingayats and from Belagavi, from the cabinet and accommodate Umesh Katti, another Lingayat and a Belagavi MLA. Hiriyur MLA Poornima K Srinivas, daughter of former minister A Krishnappa, is likely to be inducted into the cabinet in place of Shashikala Jolle.

Women and Child Development minister Shashikala Jolle, who also visited New Delhi in a hush-hush trip two weeks ago, met Jarkiholi ahead of his Delhi flight and is said to have asked him to help her retain her post in the cabinet.

Jarkiholi is said to be keen on reminding the BJP central leadership that he was assured of a Deputy CM post when he agreed to quit the Congress and join the BJP. Not everyone in the state BJP, however, seem to agree with Jarkiholi’s demand.

Leaders in the state unit are of the opinion that since Govind Karjol, an SC, is already a Deputy CM, the central leadership is unlikely to elevate Jarkiholi, an ST, or replace Laxman Savadi. The state unit leaders also expect a backlash from B Sriramulu, another prominent ST leader, and his supporters if he is overlooked for the post after being propped up as a probable Deputy CM candidate during the 2018 Assembly elections.

Now we are on Telegram too. Follow us for updates
TAGS
Ramesh Jarkiholi Laxman Savadi Karnataka politics