These will be used to sanctify the temple site; Suresh Angadi gives credits Advani’s ‘Rath Yatra’ for historic movement

BENGALURU:  Even as Ayodhya is getting decked up for the historic groundbreaking ceremony for the construction of Ram temple on August 5, Karnataka is making its own contribution to the grand event.
Water from various rivers and soil from several religious places in Karnataka will make their way to Ayodhya as a contribution and sacred gifts for the construction of the Ram temple. Prime Minister Narendra Modi is scheduled to lay the foundation stone. 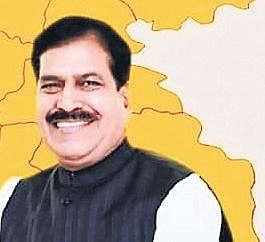 Other seers are said to have sent water from rivers such as Krishna, Bheema, Malaprabha and Ghataprabha, And soil has been sent from temples of Chamundeshwari in Mysuru, Sri Krishna in Udupi, Manjunatheshwara in Dharmasthala, Rambhapuri in Balehonnur in Chikkamagaluru district, Siddaganga mutt in Tumakuru and Datta Peetha.

Meanwhile, in Mysuru, senior BJP leader S A Ramadas is preparing to host a massive special pooja to commemorate the groundbreaking ceremony. He said over 10,000 houses, 312 temples, 25 Ram mandirs in KR constituency will conduct poojas.

He told reporters on Sunday that besides the special pooja, arrangements are made to worship Lord Ram at 14 circles in KR constituency. He said Karyasevaks from the region who took part in the Ramjanma Bhoomi movement would be felicitated on December 6 and discussions are on to send over 500 Karyasevaks from Mysuru to Ayodhya on a special train.

Even as an invitation for the event has not gone out to BJP veteran Lal Krishna Advani, Minister of State for Railways Suresh Angadi credited him for the Ram Mandir movement. “Ram Mandir is a result of 400 years of dream and non-stop movement. Several people have lent their shoulders for this movement. Some have sacrificed their lives. Let’s all join hands to build Ram Rajya which is the dream of Mahatma Gandhi,” said Angadi.

Speaking to reporters in Belagavi, Angadi said, “The Ratha Yatra conducted under the leadership of Advani played a vital role to bring the dream of constructing the Ram Mandir into reality. The verdict given by the judiciary in the Ayodhya issue made way for the temple. The 400-year long fight has finally yielded results.” The Shri Ram Janmabhoomi Teertha Kshetra Trust, formed by the Centre following the Supreme Court’s ruling in November last in favour of building the temple at the site, has fixed Bhoomi Poojan on August 5.

More from Karnataka.
Now we are on Telegram too. Follow us for updates
TAGS
Ram temple Karnataka