On July 30, the number of total recovered cases was 46,694, which nearly doubled to 80,290 in just seven days. “The death rate per 10 lakh population is least in Karnataka, compared to other places. Our state has 42 deaths per 10 lakh population, while Delhi has 204, Maharashtra has 134, Tamil Nadu has 58 and Puducherry has 42,” Sudhakar said. 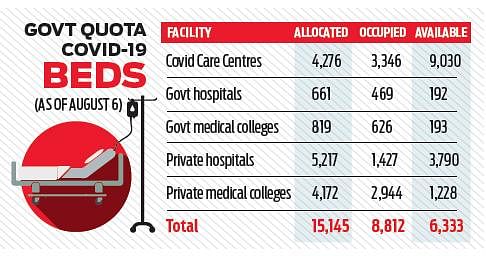 BBMP Commissioner Manjunath Prasad said that a week ago, only 3,000 antigen tests were being done a day, but now the number has touched 16,000. “We have decided to test 10 times the number of positive cases. We have limitation of manpower, so we have daily walk-in interviews calling for final-year Science students, civil defence volunteers etc. We are adding mobile testing units to all 141 Primary Health Centres,” Prasad said, adding that there are 700 ambulances.

With top health officials in talks with hospitals with more than 100 beds, the number of beds will go up from 3,300 to 5,000 soon, he added. Zonal Commissioners are in talks with hospitals having between 50 to 100 beds. “In hospitals with fewer than 50 beds, it may not be feasible to set up Covid treatment wards immediately as they may lack staff. However, they should not take us for granted, and we are filing cases against owners under the Disaster Management and KPME Act,” Prasad explained.

On Thursday, 48,421 tests were conducted, taking the total tests to 15,81,075. Senior surgeon Dr Anjanappa said in a press meet that the state was a little late in acquiring herd immunity. “I request my colleagues in hospitals not to turn away patients at the gates and at least give them a place to sit, if one doesn’t have beds. The bed situation was bad earlier but has improved in the past 3 to 4 days,” he said.

Now we are on Telegram too. Follow us for updates
TAGS
Karnataka COVID 19 Bengaluru