MANGALURU/CHIKKAMAGALURU/MADIKERI: Heavy rain that started lashing the Western Ghats and Malnad taluks on Sunday continued on Thursday, causing severe damage to houses, bridges and crops.
Rivers overflowed in several parts of Belthangady taluk, snapping connectivity and causing minor landslides in Charmadi Ghat. The bathing point at Dharmasthala Sri Manjunatha Temple was flooded, and devotees were not allowed to venture into the river to take a holy dip. 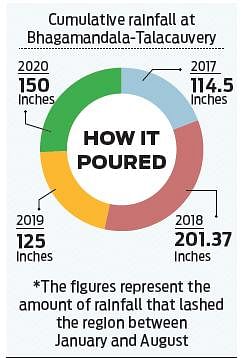 Heavy boulders rolled onto Charmadi Ghat road, but were cleared immediately. Belthangady tahsildar Mahesh J told TNIE that families living in low-lying areas at risk of landslides, were shifted to a government school at Mithabagilu village. The rain brought down several trees in Charmadi Ghat, and the overflowing Mrityunjaya river brought along logs of trees fallen in the ghat, blocking the Antara-Aranapade vented dam-cum-road. However, water level in the river depleted by evening. Earthmovers were deployed to clear tree logs in Charmadi village.

The meteorological department issued a warning to fishermen not to venture into sea, with strong squally winds with speed reaching 50-60 kmph likely to prevail along the coast. As many as 14 houses in Chikkamagaluru Kasaba hobli are either completely or partially damaged, with one house in Mudigere taluk collapsing. Luckily, there are no casualties.

Hill slides occurred on roads of Samse, Kudremukh, Channahadlu and Hirebail. Uggehalli in Mudigere is under threat due to the overflowing Hemavathy river. The administration declared a red alert in the district. Minister CT Ravi has directed the deputy commissioner to assess damage caused by rain and flood. Yagachi reservoir is filled to the brim following heavy rain in catchment areas.

Roads, bridges cut off
While Kodagu saw a respite from continuous rainfall on Thursday morning, heavy rain continued to batter the district post noon. Water level in major rivers in the district reached an alarming state, even as road commute within the district was cut off. Three relief centres were opened in the district. Traffic across Bethri Bridge on Madikeri-Virajpet Road was halted, following flooding of the Cauvery. The Lakshmanatheertha river has flooded parts of South Kodagu, and Napoklu-Madikeri-Murnad road was cut off. The compound wall of Nalknad Palace in Napoklu collapsed due to continuous rainfall.

Now we are on Telegram too. Follow us for updates
TAGS
Western Ghats Malnad Rainfall