Free movement of people after the easing of lockdown restrictions, reverse migration and increase in the number of tests have been attributed to the significant increase in cases.

BENGALURU: As Karnataka crossed the three-lakh mark in Covid-19 tally — a huge jump from 1.29 lakh positive cases in the beginning of the month — the virus seems to be spreading fast in small towns and villages. On Saturday, the state reported 8,324 new cases, taking the total to 32,7076.

Free movement of people after the easing of lockdown restrictions, reverse migration and increase in the number of tests have been attributed to the significant increase in cases in places like Shikaripura and Bhadravathi taluks in Shivamogga district, which saw a big jump and reported over 1,000 cases in August.

“People in villages, specially farmers, depend on Shivamogga city for purchase of seeds, fertilisers and equipment. When they visit crowded areas, they get infected and take back the virus to their villages. Tracing such people is a challenging task,” Shivamogga District Health Officer Dr Rajesh Suragihalli told The New Sunday Express. 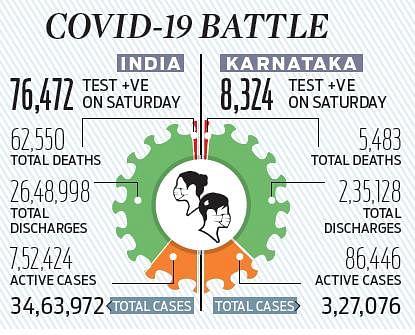 “Large sections of the population in most taluks and villages depend on nearby cities for business and marketing. As a result, frequent shuttling of the rural population between cities and villages has led to a rapid spread of Covid-19 into rural pockets,” he said.

“We can treat and cure them. It would be more worrisome if the cases were not tested and the number of casualties goes up due to comorbidity. Of the total 204 Covid deaths in the district, over 170 deaths are due to comorbidities,” he pointed out.

It is the same scenario in most towns and villages of the state. Health Department officials said Covid cases in rural areas, which were initially untouched by the pandemic, have started witnessing a surge after people from Bengaluru and other high-prevalence cities and states started returning to their native villages and towns.

As normalcy returned, apprehensions over contracting the virus slowly disappeared, and it was also not easy for the already stretched government machinery to enforce preventive measures or take up awareness drives with the same zeal as during the lockdown.

“Only 5 per cent of people in villages wear masks, or follow social distancing norms. And, compared to urban areas, the number of tests conducted in the rural areas is not much,” said a doctor working in Dharwad district.

“The actual numbers of positive cases will be much higher as people do not come forward to get themselves tested even if they have symptoms,” he said. The floating population is the main reason behind the Covid-19 spread in villages in Dharwad district.

Every day, hundreds of people visit the twin cities of Hubballi and Dharwad from villages for various purposes.

Dr Laxmikant Lokare, community medicine expert at KIMS, said use of masks and social distancing are not being followed in the villages.

Late reporting has been another major concern across the state, including in Bengaluru, and this is considered as the major cause for mortality.

Additional Chief Secretary to the Health and Family Welfare Department, Jawaid Akhtar, however, insists that adequate number of tests are being conducted in rural areas and it is because of an increase in testing that a rise in positive cases is reflected.

While testing is being ramped up, the Health Department is also planning to take up another round of survey.

“One more round of house-to-house survey is being taken up to identify people with symptoms and get them tested,” Akhtar said, adding that a similar exercise conducted in the state earlier was more comprehensive in rural areas.

“(We have to) accept the current scenario and people need to be responsible for themselves. Benefits of freedom come with some responsibilities and one has to be careful and responsible,” said Dr M K Sudharshan, who heads the technical committee for Covid, constituted by the State Government.

“Infection will spread and there is no reason to panic.”

He added that movement of people after lockdown norms were eased is the major reason for the spike in cases in rural areas and adequate facilities like Covid Care Centres (CCC) and Covid Hospitals have been created to handle the situation.

Though facilities are created, convincing people to take tests early is still a big challenge, and delays in getting the test results is also a concern. In Kolar, 40 per cent of the 3,102 cases as on Wednesday last were from Kolar town, but people were not coming forward to get tested even if they have symptoms like fever and cough.

District Health Officer Dr Vijaya Kumar said they have been appealing to people to take tests voluntarily as it helps contain the spread.

WHAT IS BEING DONE

In a marked departure, Covid-19 has not penetrated much in rural areas of the coastal region.

Dakshina Kannada and Udupi districts have been witnessing a surge in Covid-19 cases since the start of the pandemic, but the rural areas and small towns of the region have not been affected much and it is mostly the district headquarters of Mangaluru and Udupi which are badly hit.

Sources in the health department said the rural parts in the coastal region are not affected much because of the widely dispersed villages where human-to-human contact is minimum, unlike in other parts of the state that have nucleated villages with houses located close to each other.

(With inputs from district bureaus)