“We cannot sit back and wait for God to set right the mess we often put ourselves in.

BENGALURU:  Former Prime Minister H D Deve Gowda on Sunday pointed out that state governments let go of their right to levy taxes to allow the implementation of GST regime and it is only right for the Centre to not shirk its responsibilities now and compensate the states. 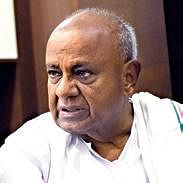 Issuing a statement, he said, “To ask states to borrow is a skewed idea because, in July 2017, the States had given up their right to levy taxes and had allowed GST to take over. They had agreed to do so because the Centre had assured them of adequate compensation.” States are already under a financial strain and have done all the hard work and heavy lifting during the pandemic, he said.

“We cannot sit back and wait for God to set right the mess we often put ourselves in. As the proverbial saying goes, God helps those who help themselves,” he said, responding to Union Finance Minister Nirmala Sitharaman’s reference to big losses in GST revenues as an ‘Act of God’.

Gowda said that apart from GST, the new formula for devolution of taxes under the 15th Finance Commission too has created some disquiet. Progressive States feel that they contribute more to Central taxes, but receive much less in return. Gowda urged the Centre to engage with states actively and not abandon the spirit of dialogue and consensus.

Now we are on Telegram too. Follow us for updates
TAGS
Deve Gowda GST