She was brought in by the police from the Gurappanapalya containment zone. Though she did not show any symptoms, she was tested as she came from a high-risk zone.

BENGALURU: While it has just been a week since the National Institute of Mental Health and Neurosciences(NIMHANS) started its emergency services, the institute confirmed that it witnessed the first Covid-positive case on Sunday. 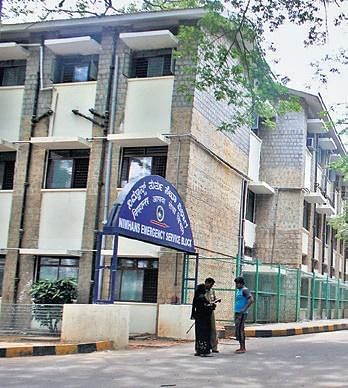 A circular issued by Dr B N Gangadhar, Director, NIMHANS, stated, “A 34-year-old patient with mental illness requiring emergency medical care was brought to the hospital on Friday and was admitted for observation. However, she was tested positive, though she did not show any symptoms of Covid-19 and the patient was shifted to Victoria Hospital for treatment.”  Officials said that the woman was wandering about and was mentally ill.

She was brought in by the police from the Gurappanapalya containment zone. Though she did not show any symptoms, she was tested as she came from a high-risk zone. Her test result came positive on Saturday at 10.30 am and immediately, emergency services were shifted to the adjacent building. Her mother too was found and moved to Bowring Hospital.

Some NIMHANS officials said that nearly 100 people have been quarantined, including the doctors, nurses, other staff and admitted patients. “Many of them were quarantined on NIMHANS premises in separate blocks where there is space. The samples of those who were in close contact will be taken. However, the staff members were wearing PPEs,” said a professor.

The emergency building was sanitised and now, emergency care has been organised at the adjacent building, which is the centre of addiction. “We will continue the sanitisation procedure till Tuesday and after that, emergency services will be shifted back to the same block,” another professor said. Pratima Murthy, HoD, Psychiatry Department, said, “As some patients, who are mentally ill, too have to be quarantined, we are focusing more on them and counselling them not to worry.”

More from Karnataka.
Now we are on Telegram too. Follow us for updates
TAGS
Karnataka NIMHANS COVID 19 cases