KALABURAGI: Over 10,000 students of the Kalyana-Karnataka region remained absent for the SSLC mathematics exam that was held in 541 exam centres on Saturday. Official sources said that other than Koppal, the number of students absent was high in all districts in the region, as compared to the number of students who attended the language paper held on Thursday.

Deputy Director of Public Instruction S P Badagandi told TNSE that the students who were absent for the maths paper can rewrite it in the supplementary exams to be held later, but they would be considered as supplementary students. However, the students who were absent because they were under quarantine or had health problems can give the exam later as normal students, he added. 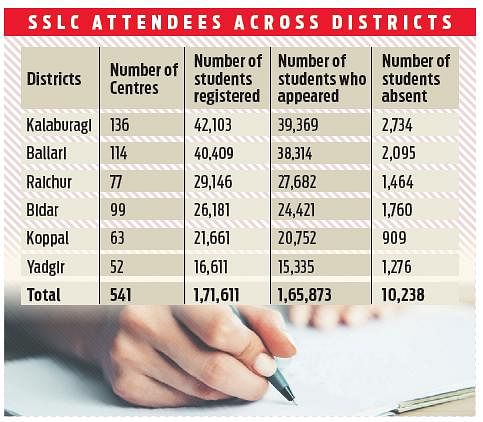 Chandrashekhar Azad, whose daughter appeared for the maths exam, told TNSE that the paper was somewhat difficult. Bharamappa, a student, said that he skipped the exam as he could not prepare well due to the lockdown. Academic Shanti Desai said that students were absent for two reasons — the fear of contracting Covid and the lack of preparation due to the lockdown.

Altogether 1,150 students, from containment zones wrote the exam, while 70 students were accommodated in special rooms as they were unwell. Meanwhile, additional commissioner of public instruction Nalin Atul instructed officials to file cases against seven students who got others to write the paper for them on June 25. The public instruction, health and police departments have made elaborate arrangements in view of the Covis-19 pandemic. All students had to mandatorily wear masks and all were screened before being allowed into exam halls.