The total number of COVID-19 cases in Karnataka stood at 55 on Thursday, with four new cases being reported.

BENGALURU/MYSURU: Karnataka recorded its first case of COVID-19 in a patient without any travel history abroad or contact with any person who had returned from abroad and had tested positive. This comes even as the Union Health Ministry on Thursday claimed that there has been no solid evidence so far of community transmission of the disease in India. The ministry also said the infection appears to be relatively stabilising, considering the rate at which it is increasing.

The total number of COVID-19 cases in Karnataka stood at 55 on Thursday, with four new cases being reported. Mysuru Deputy Commissioner Abhiram G Sankar said Patient-52, a resident of Mysuru, is currently being treated at a designated hospital in the district. 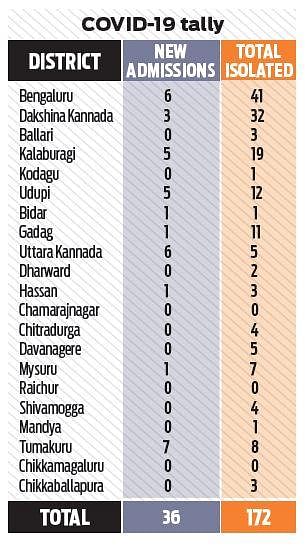 “Patient 52 has no travel history. He was with the quality assurance section of a pharmaceutical company in Nanjangud and has been in contact with many healthcare professionals. A detailed investigation is underway. Seven of his primary contacts have been traced and are under home quarantine,” the Health and Family Welfare Department said in a statement. Asked if this indicates community transmission of the pandemic, which is Stage-3, Health Department Commissioner Pankaj Kumar Pandey denied it and said the patient had met many people.

On why testing was done on a person with no travel history, Dr Prakash Kumar B G, Joint Director, Communicable Diseases, told TNIE, “He had bilateral pneumonia which is why he was tested as per revised guidelines of the Union Government.” Meanwhile, Nanjangud MLA Harshavardhan, in a social media post, said the pharmaceutical unit in Nanjangud has been shut down. “The entire factory and surrounding areas will be sanitised,” he said. As of March 26, three positive COVID-19 cases have been reported in Mysuru district.

The number of those under home isolation has jumped from 321 to 896 in the last three days. A 70-year-old woman from Chikkaballapur district (Patient 53), who died at Bowring Hospital in Bengaluru on March 24, becoming the state’s second fatality, had a history of travel to Mecca, Saudi Arabia, and had arrived in India on March 14. The last rites were conducted as per the Centre’s guidelines. A 64-year-old man (Patient 54), of Anantapur in Andhra Pradesh, had a history of travel to France. He arrived in India on March 1 and later travelled to Himachal Pradesh, Puttaparthi and reached Bengaluru on March 21. A 45-year-old from Bengaluru, who works as a security guard, has been identified as Patient 55. He is a contact of Patient 25, a 51-year-old male from Bengaluru who went to London and returned on March 13.

Meanwhile, the State Government has begun sticking boards in front of people’s homes to indicate that they are home-quarantined. This is done so that neighbours do not step into the houses and to ensure that the isolated person is aware of the rules. Home Quarantine Enforcement squads quarantined 42 people on Wednesday based on public complaints.

Stay up to date on all the latest Karnataka news with The New Indian Express App. Download now
TAGS
COVID-19