The district has only one testing centre, the Indian Council of Medical Research -- National Institute of Traditional Medicine (ICMR-NITM).

BENGALURU: Despite having the second highest number of cases in the state, after Bengaluru, Belagavi has done less than half the number of Covid-19 tests Bengaluru has. While Bengaluru, with 184 positive cases, has done 15,750 tests, Belagavi, with 114 cases, has done only 6,450 tests, as per the war room data shared on May 13.

The district has only one testing centre, the Indian Council of Medical Research -- National Institute of Traditional Medicine (ICMR-NITM).Belagavi’s cases are largely linked to the Tablighi Jamaat congregation in New Delhi -- 85 people who came in contact with four people who returned from the event, contracted the virus. Last Sunday, 22 new cases in the district had a connection to Ajmer in Rajasthan. 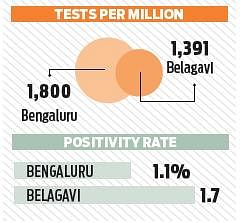 Dr S V Munyal, Belagavi district health officer, said, “We have diagnosed more cases due to testing in a scientific manner. We have done the second highest number of tests in the state, and focused on testing those in sensitive areas and containment zones.

There is a large migratory population from Rajasthan who tested positive. If required, we will add testing labs.” Despite his claim, the district with the second highest number of tests is Kalaburagi, with 6,660 tests done so far. Covid-19 spokesperson Minister Suresh Kumar said, “There are 38 ICMR approved labs in the state. We plan to open more labs in Belagavi.”

Now we are on Telegram too. Follow us for updates
TAGS
COVID-19 Belagavi Karnataka Coronavirus