Since ages, the ash gourd grown by farmers of Thirthahalli in Shivamogga district has been satiating the discerning sweet tooth in faraway Agra.

BENGALURU/THIRTHAHALLI: Since ages, the ash gourd grown by farmers of Thirthahalli in Shivamogga district has been satiating the discerning sweet tooth in faraway Agra. The large vegetable serves as the prime ingredient for the delectable petha – a sweetmeat that is the pride of Agra, other than the Taj Mahal. The lockdown, however, disrupted this arrangement, with the harvest going waste. The situation forced local farmers to discover alternative means to put their produce (which is about 2,000 tonnes annually) to the best use.

“Due to Covid-19 this year, the supply to Agra was halted, landing the farmers in trouble,” Shree Padre, a progressive farmer, says. Recently, a photograph of a young ash gourd grower, Keerthan from Thirthahalli, went viral. It showed him urging authorities to purchase his produce. Not just him, many other farmers in this area are not finding any market. It was at this juncture that Thirthahalli MLA Araga Jnanendra decided to try something novel. He roped in food entrepreneur Vishwanath Kuntavalli, and chanced upon the idea to locally manufacture the petha and sell it. With the support of Kuntavalli and others, the administration set out on a model to procure the gourd from the surrounding areas and make the petha in Thirthahalli’s own backyard. 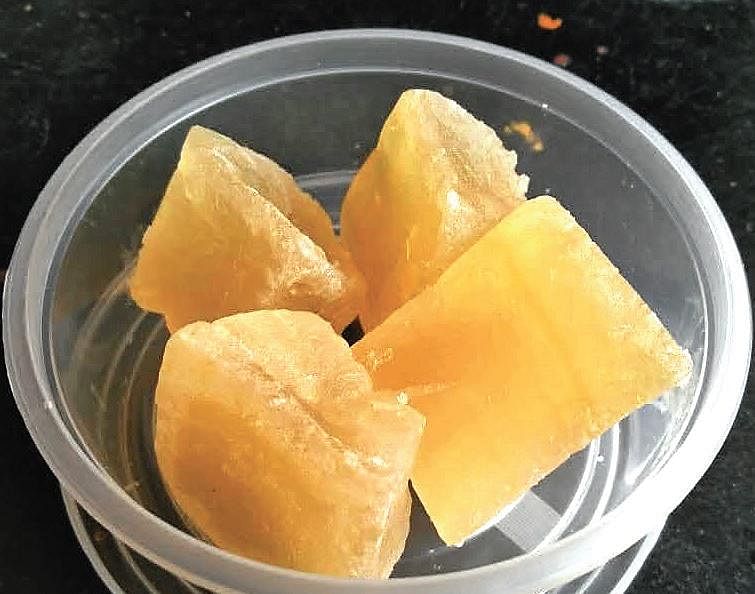 Various brain-storming sessions later, trials for petha production began through the help of Kuntavalli’s Ibbani Food Industries. In order to understand the recipe, they watched petha-preparing tutorials on YouTube. “None of us knew a lot about petha, as it isn’t produced commercially in Karnataka. It involves a long process of around three days for a single round. However, through YouTube and with the help of a local sweet vendor, we were able to learn how to prepare it,” Tahsildar Sripad says.

Meanwhile, Kuntavalli had stocked up nearly 2 tonnes of the gourd and started production. “Once all the required permits are received, the produce will hit the market,” ipad adds. Kuntavalli, a mechanical engineer himself, hails from a family of arecanut growers. He designed a machine which cuts ash gourds into smaller pieces and boils them. With the petha’s shelf life lasting over six months, the sweet delicacy made here is sans any preservatives, and contains mostly sugar. Further, if the entire ash gourd harvested here is utilised in petha-making, the farmers can be assured of good value addition.

Kuntavalli has plans to procure at least 1,000 tonnes of ash gourd from local farmers. In terms of distribution, Kuntavalli says, “We are already in the food industry, with our dealers spread across the State. We will push petha sales through them.” Jnanendra says, “I was upset on hearing that our farmers, who were getting Rs 25 a kg for their ash gourd, had to sell it for Rs 2.

Therefore, we tried to link them with an entrepreneur. Now they need to be linked with a market.” The plan is to sell the product through HOPCOMS and KMF outlets across Shivamogga district and the rest of Karnataka. If it succeeds, large-scale production of the pethas can begin. Aptly called ‘Farmers Petha’, Jnanendra on his part has lofty plans for the new delight. “We want to create brand ‘Thirthahalli’ through the Farmers Petha. People should understand the nutritional value of this product and come forward to buy it, so that our farmers can reap the benefits,” he says.

Nutritional aspects of ash gourd
Ash gourd (benincasa hispida) is a vine which bears large fruit, and is consumed as a vegetable. Primarily composed of water at 96 per cent, it boasts of a variety of beneficial nutrients  --- Vitamin C and B-Complex, Niacin, Thiamine and Riboflavin, apart from minerals like iron, potassium, zinc, calcium and magnesium, along with proteins, carbohydrates and dietary fibres.