The Karnataka health department is closely watching people with a travel history to 30 cities in states that account for almost 80 per cent of India’s cases.

BENGALURU: The Karnataka health department is closely watching people with a travel history to 30 cities in states that account for almost 80 per cent of India’s cases. While people from three states — Maharashtra, Tamil Nadu and Gujarat — are banned from entering Karnataka till May 31, those coming from other states are being watched closely.The Covid war room has recorded a clear spike in cases among those who have returned from Mumbai (Maharashtra), Chennai (Tamil Nadu) and Ahmedabad (Gujarat). 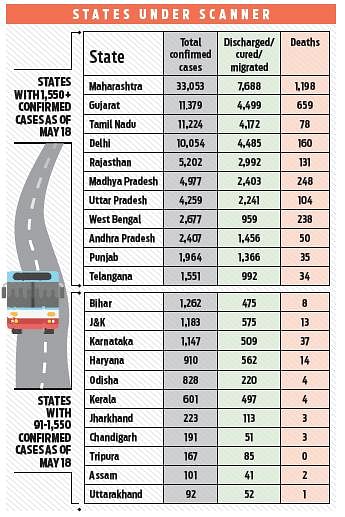 Officials are now looking at strong micro planning, and shifting their focus to containment zones, even in districts.“Our focus will be micro management. Every district will need to have a real-time dashboard that shows the six parameters given by the central health ministry,” explained a senior health official.He said the number of active cases, rigorous testing, contact tracing, monitoring of fatality rates, infection doubling are a few of the parameters they are looking at.

Soon, pool testing will begin for those who have had travel history to the 30 municipalities. “People coming from these cities will be strictly quarantined. Those with mild symptoms will have to go into institutional quarantine, the asymptomatic will be stamped and home-quarantined,” said Commissioner for Health and Family Welfare Pankaj Kumar Pandey.The state has also requested people to avoid travelling to the three states till at least May 31, unless it is an emergency.

More from Karnataka.
Now we are on Telegram too. Follow us for updates
TAGS
Karnataka COVID 19 Coronavirus