The Director General of Civil Aviation has identified seven airlines for operating on domestic routes on different days between May 25 and August 24.

BENGALURU: The Director General of Civil Aviation has identified seven airlines for operating on domestic routes on different days between May 25 and August 24. A total of 130 departures and 131 arrivals from Bengaluru, Mysuru, Mangaluru, Belagavi and Bidar have been tentatively listed under the Airport Movement Report released late on Thursday night, but only one-third of these flights will finally be operated.

Even as Air India announced that booking of tickets had begun from 12.30 pm on Friday and there was much excitement about it on social media platforms, there were apprehensions in some quarters whether flight operations will actually commence on Monday. “There is no clarity on many issues regarding start of operations with just two days to go. Everything is vague and the announcement has been abruptly made. The list of flights is itself not yet finalised,” pointed out a source. 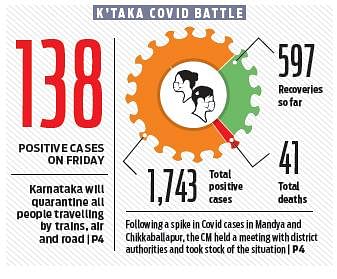 Flyers from 6 high-risk states to be quarantined

Neither any of the airlines nor the Bangalore International Airport Limited, operator of Kempegowda International Airport, had any concrete information. An official said, “A tussle was going on in the state government ever since the announcement on resumption of operations was made by the Civil Aviation Ministry, as to whether passengers should be compulsorily quarantined or not.” “The rules should be the same for all. When all railway passengers entering Karnataka are sent to 14-day institutional quarantine, the same should apply to flyers too.

One cannot let the rich get away while penalising others. The only way out is to completely do away with the quarantine requirement for all those who enter the state,” the official argued. However, on Friday, the state finally modified its rules for interstate returnees making seven- day institutional quarantine compulsory only for six highrisk states followed by a week of home quarantine. “All other state returnees need to go in for home quarantine,” N Manjunatha Prasad, Nodal Officer for Migrants, said.

The aviation ministry had made it clear that the SOPs of the destination states need to be followed. An airport official pointed out that domestic travellers entering Karnataka will be averse to air travel if they are subjected to any quarantine. As per the Airport Movement Report, Bengaluru will see 221 departures and arrivals. A pair of flights (arrival/departure) has been proposed for Bidar, eight pairs for Mysuru, 6 pairs for Mangaluru and 5 pairs for Belagavi. The schedule is dependent on the availability of slots.

Stay up to date on all the latest Karnataka news with The New Indian Express App. Download now
TAGS
domestic flights Karnataka