VIJAYAPURA: The entire North Interior Karnataka region remained in the grip of a blistering heatwave. And Vijayapura witnessed its hottest day in recorded history with 45.3o Celsius, where the previous maximum was 42.3o Celsius in the district.

At the time when cyclone Amphan made a landfall in West Bengal and Odisha, Karnataka was issued its first heatwave warning of the season by the Karnataka State Natural Disaster Monitoring Centre (KSNDMC). It said that isolated pockets of North Interior Karnataka and eastern parts of Chitradurga, Tumakuru, Kolar and Chikkaballapur will witness heatwave conditions till May 28.

Meteorologists claim that “it is for the first time the heatwave warnings have been issued in Karnataka. In the past, we had received warnings of high temperature but not about heatwaves. The heatwave will last for hardly a week and will not make an impact on the upcoming monsoon.”

According to KSNDMC, “In the last couple of days, the temperatures in the districts of North interior, South interior and Costal Karnataka have risen by more than 3o Celsius.”

Dr M B Rajegowda, former registrar of University of Agricultural Sciences Bengaluru, said, “There are a couple of factors for the heatwave warnings in the region. As there has been no rain in the region since a fortnight, the atmosphere heat continues to build up and leads to an increase in low pressure in the area. Later, the moisture available in the atmosphere will be dragged by the cyclone and this leads to dry air in the atmosphere; dry air comes when solar radiation continues and it keeps on heating the atmosphere. This results in a heatwave.”

“Another factor is because of zero agricultural activities. As all the fields are dried up, no crop will inject the moisture into the atmosphere either through transpiration or evaporation. Where there is no crop there will not be sufficient moisture. And this leads to heatwaves in the region. It is definite that these parts, where heatwave warning has been given, will receive heavy rainfall in the next few days,” he said.According to experts, the temperature recorded in Almel of Vijayapura – 45.3o Celsius – is the highest mercury level recorded in history.

Speaking to TNIE, Dr H Venkatesh, Principal Scientist of Agrometeorology (retired), said, “It is the highest temperature recorded in the last two decades. The summers in this region have always witnessed high mercury levels, where the average temperature is 40 o Celsius. We are almost nearing toward the monsoon. The heatwave warnings might delay the southwest monsoon this season.”

Amid the heatwave warnings and the guidelines issued by the KSNDMC about changing the working hours, the state government is yet to make a decision. 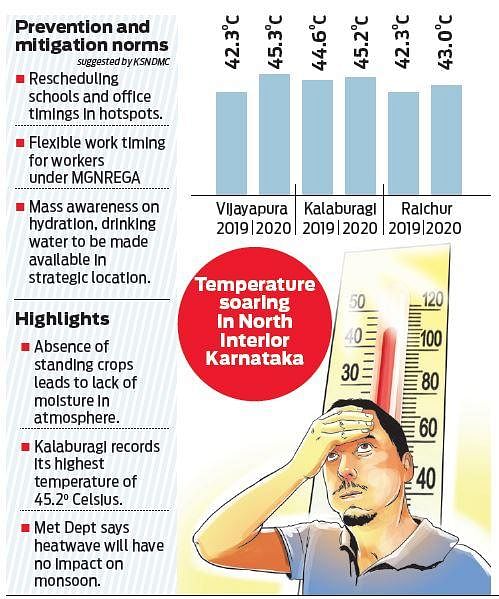 More from Karnataka.
Now we are on Telegram too. Follow us for updates
TAGS
North Karnataka heatwave