Distribution of ration suggests that foodgrains may be siphoned off; 15 kg per person not given

BENGALURU: Doddasidde Gowda, a BPL cardholder, went to the ration depot for his monthly share of foodgrains but was told by the depot in-charge that he was not entitled to his usual 15kg. Apparently, Gowda (name changed) is not the only one being short-changed. Many BPL cardholders maintained that they have received a few kilograms less. 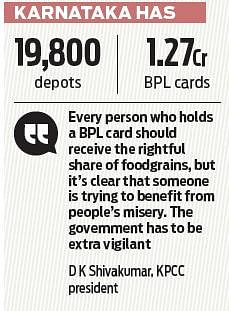 Under the Food Security Act, a person is entitled to 5 kg per month, and under the PM Garib Kalyan Ann Yojana, gets an additional 10 kg of foodgrains, wheat and pulses per month in Karnataka. FCI national chairman D V Prasad told TNIE, “During the lockdown, we provided Karnataka 11.8 lakh tonnes of foodgrains, 3.81 lakh tonnes under the FSA and 6 lakh tonnes under the PMGKAY -- a total of 9.81 lakh tonnes -- and the remaining under different schemes to migrants and others.’’ To this, Karnataka Food Minister K Gopalaiah said, “We have given 10 kgs rice and 1 kg dal per person in May.

In April, we gave 10 kg rice and 4 kg wheat. From June onwards, we will give 10 kg rice, 2 kg dal and 2 kg wheat.’’ But these figures do not reflect in the distribution of foodgrains in many places. Aadhaar cardholders have not got their due of 5 kg either. Kalai, a domestic help, said she got only 3 kg rice, half a kg masoor dal, quarter kg sugar and Rs-5 packets of chilli powder, dhania powder and turmeric powder. Ravikumar’s household of four got 40 kg of rice for two months, but no dal or wheat.

Shanthinagar MLA N A Haris, who visited ration depots, said, “Many of my constituents are housemaids and daily wage labourers, who complained that they have not received their due of 10 kg rice (per person), 1 kg dal (per card) and 2 kg wheat (per card) per month. The number of cardholders could be over 40,000 in my constituency.” KPCC president D K Shivakumar said, “Every person who holds a BPL card should receive the rightful share of foodgrains, but it’s clear that someone is trying to benefit from people’s misery. The government has to be extra vigilant.”

More from Karnataka.
Now we are on Telegram too. Follow us for updates
TAGS
BPL cardholder