Ameer Ahmed, 28, earned a decent salary as a receptionist at a Bengaluru hotel. He had no criminal history. But Covid changed all that. He lost his job and couldn’t find another.

Nobel Peace Prize winner Nelson Mandela, the South African anti-apartheid revolutionary who served as President of South Africa from 1994 to 1999, once said: “When a man is denied the right to live the life he believes in, he has no choice but to become an outlaw.” The Covid-19 pandemic which descended early this year forced lockdowns.

That, in turn, ushered in an economic slowdown, sending lakhs out of jobs. As businesses shut, the unravelling situation denied many the right to live the life they believed in, luring them towards crime and violence. Ameer Ahmed, 28, earned a decent salary as a receptionist at a Bengaluru hotel. He had no criminal history. But Covid changed all that. He lost his job and couldn’t find another.

A desperate Ahmed came across a person from Visakhapatnam who had ‘stuff’ that could help him earn big money. It turned out to be ‘ganja’. Ahmed, while searching for potential customers near a Peenya factory, was arrested and jailed. Sameer Kumar Shah, 25, too lost his job like Ahmed. Desperation drove him to use a photo of a woman manager of a women’s fashion store, impersonate her and send messages to her colleagues asking for money to be deposited in a bank account on the pretext of the woman’s mother needing treatment. 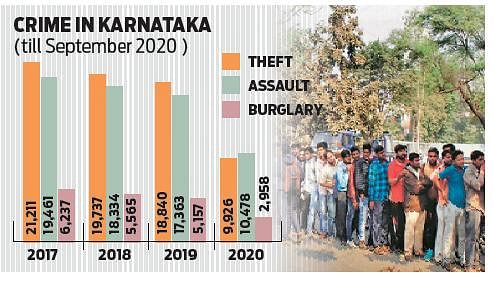 One even deposited Rs 4,500. When the woman learnt of it, she filed a complaint with East Cyber, Economic & Narcotics (CEN) police, who nabbed him in July. In another incident, daily wage workers from a village near Jamkhandi taluk in Bagalkot district targeted elders wearing jewellery after being denied jobs at construction sites. On being arrested, they confessed to robbing as they were jobless. Police officials said that though crime has not increased, the pandemic-triggered job loss has resulted in more first-time criminals -- like Ahmed, Shah and the daily wage workers.

Retired Assistant Commissioner of Police BB Ashok Kumar said, “There are instances of circumstances pushing people with no criminal history to commit crimes like chain snatching. Such incidents will stop only when the economy improves.” S K Umesh, a retired Superintendent of Police, said, “As many lost their livelihoods, they started committing crime.

She said her centre received more cases of marital discord, harassment by alcoholic spouses and in-laws, and personality disorders as families faced financial difficulties and health issues. At Mangaluru Santwana Kendra, over 150 cases of family disputes were registered between January and October this year which is the highest in Dakshina Kannada. Dr P V Bhandary, a renowned psychiatrist from Udupi, said that during the pandemic when children have remained at home, instances of them being hit by their alcoholic father were reported.

In one instance, a 35-year-old businessman, who had suffered big losses during the lockdown, took to the bottle. His seven-year-old daughter developed severe anxiety disorder. “We had to treat both the child and father at our hospital. The effects of lockdown are going to last long,” he said. Vidya Dinkar, a Mangaluru-based social activist, said that there are lot of cases of owner-labourer dispute especially involving migrant labourers who weren’t paid nor given any facilities post-Covid19 period.

Bengaluru, on its part, has witnessed owner-tenant disputes. Mahalakshmi shared a good rapport with her tenant Poornima in Laggere in Bengaluru. But the latter was unable to pay rent for four months. On October 30, the owner demanded that she clear her dues. While the owner was in need of money, the tenant had no money to pay rent. This sparked a fight, ending in in the landlord stabbing her tenant. While the tenant recovered, the landlady is cooling her heels in the jail.

In a similar incident in HMT Layout, landlord Syed Iliyas and his tenant Mohammed Naqvi assaulted each other and stepped in to RT Nagar police station, filing a complaint against each other.
In Kalaburagi, a gang was busted in Jewargi town in October in connection with blackmailing and looting money from lorry owners/drivers transporting foodgrains for mid-day meals scheme. Mysuru reported several instances of thieves taking advantage of school closure to steal expensive items from the premises.

Former DG&IGP ST Ramesh said economic slowdown results in unemployment and various business establishments undergo loss or close down. “When sources of income dry up, people tend to look for shortcuts to earn money and crime becomes an option. In such unprecedented times, police vigil may not succeed in putting down crimes. The only solution is for the economy to improve,” he says.

Now we are on Telegram too. Follow us for updates
TAGS
jobless crime Covid-19 economic slowdown