BENGALURU : Four members of a gang were arrested on Saturday for the sensational murder of bar owner Manish Shetty, who was shot and hacked to death on Thursday night. When two of the accused were being taken for the recovery of a murder weapon, they attacked the policemen, who opened fired and injured them. 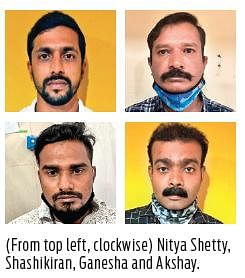 Manish Shetty (45) was killed by bike-borne assailants in full public view in front of his bar off Brigade Road in the Central Business District.  The gang first shot at him using a single-barrel breach-loading gun and then hacked at him four times with machetes. The arrested have been identified as Shashikiran alias Munna (45) and Nitya Shetty alias Nikki (29) from Somwarpet in Kodagu, Ganesha (39) from Mangaluru and Akshay (32) from Bantwal.

A senior police officer said a special team, headed by an assistant commissioner of police from the Cubbon Park police station, picked up two of the accused, Munna and Akshay, from a lodge in Gandhinagar on Saturday afternoon. They were taken to Barlane Cemetery on Hosur Road around 6.30 pm to recover the machetes used in the crime. But the two tried to attack the policemen when the officers opened fire and neutralised them. The injured duo was taken to a nearby hospital for treatment.

The officer said that the investigators tracked the two with the help of CCTV footage and found out that they had booked a room at a lodge near Majestic a week ago. The accused had observed the movements of Manish Shetty before attacking him on Thursday. Five more accused are being traced. Preliminary investigations revealed that Nitya and Manish were involved in gang war in Mangaluru and had nurtured a rivalry for the last several years.

Gang observed Manish’s movements
The prime accused, Shashikiran and Nitya, hatched a plot to murder Manish four months ago. On Thursday night, Ganesha was riding the bike, while Nitya, who was on the pillion, opened fire at Manish. Akshay attacked him with a machete.

Now we are on Telegram too. Follow us for updates
TAGS
Karnataka bar owner murder Karnataka gang rivalry