Retired officers and experts sometimes working continuously without a day off, and having to forego some of their leave.

BENGALURU: The Karnataka State Police force has been stretched beyond its capacities with a huge shortage of over 20,000 personnel in various ranks, the bulk of vacancies being at the crucial constabulary level. The Covid-19 situation has only made matters worse with no recruitment happening.

The police force, at present, has a total of 20,203 unfilled vacancies, with 15,560 of them in the constabulary, which can hamper anti-terror operations, intelligence gathering, anti-Naxal and other sensitive operations. The police force has been traditionally about 1.08 lakh-strong, and posts falling vacant due to retirement of personnel were filled up with regular recruitment drives. 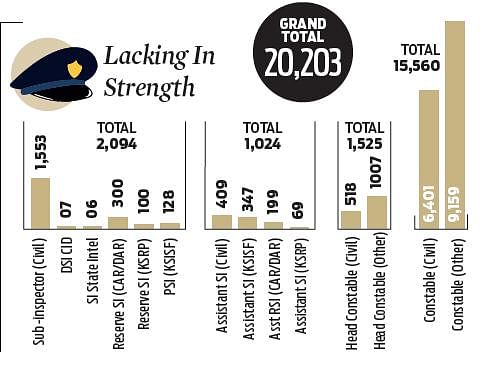 Recruitment is usually conducted for four levels — Constable, Sub-Inspector, Deputy Superintendent and Superintendent of Police — but this has been frozen for now, leaving the force with a huge shortage of personnel for many months now. Retired officers and experts pointed out that, given the current situation, the personnel are overworked and overburdened.

Retired officers and experts sometimes working continuously without a day off, and having to forego some of their leave. With the revenue crunch and the Covid challenge, the government may find it tough to fill up all the vacancies, they felt.

The security experts also pointed out that about seven years ago, the number of vacancies was about 22,000 and the government had initiated steps to recruit about 8,000 police constables, about 500 sub-inspectors and 7,000 Home Guards. However, retirement of personnel over the years, coupled with inadequate and timely recruitment, has led to the current situation.

A one-time mammoth recruitment drive is not the solution, but should be done on a regular basis, they suggested. When contacted, Home Minister Basavaraj Bommai said, “We are filling up about 16,000 vacancies in batches. We cannot fill up all these in one go. There is an extensive selection process and an elaborate training schedule and hence, we are doing it in batches.

We have already started with two batches and will gradually fill up the vacancies. After these batches are trained, they will be inducted into the force.” Additional Director General of Police (Administration) M A Saleem too confirmed that the process of recruitment is on.

Now we are on Telegram too. Follow us for updates
TAGS
Karnataka State Police Covid-19