With BIS made mandatory, Centre toys with Channapatna manufacturers’ future

The initial testing costs itself will come up to Rs 2 lakh per family of toymakers.

BENGALURU:  With the Union government making Bureau of Indian Standard (BIS) certification mandatory for toys, artisans and families dependent on them in ‘Toy town’ of Channapatna fear for their future. As per the Union Ministry of Commerce, toy manufacturers have time till January 1, 2021 to get BIS certification. But industry insiders, as well as opposition leaders, warn that the move will be disastrous for traditional craftsmen who have depended on toy making for centuries in Channapatna.

Channapatna toymakers and distributors are already struggling to stay afloat after GST on toys was hiked from 5.5% to 12% suddenly followed by the more disastrous Covid-19 lockdown.“Artisans in Channapatna are not computer savvy but the BIS certification process is online. Worse is the fact that there is not a single BIS laboratory in South India. We have to send samples to labs in North India for testing because pre-testing has to happen in a laboratory following which we will get a BIS certification. 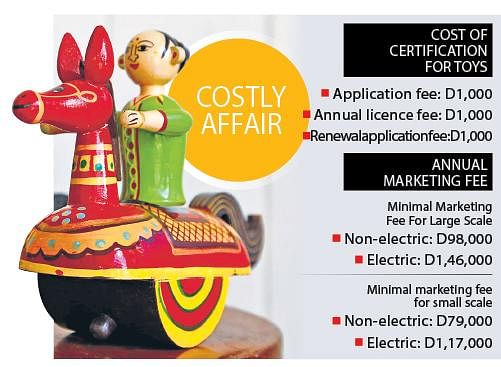 The initial testing costs itself will come up to Rs 2 lakh per family of toymakers. This is excluding yearly re-assessments, repeat testing of toys etc,” said Sreekala Kadidal, Independent Director, Channapatna Crafts Park. She added that the exercise will adversely impact more than 2,000 artisans and their families.

The Centre’s move to make BIS certification mandatory is aimed at weeding out Chinese toys from the market and enhancing toy exports, but industry insiders believe given the nature of the sector, the move may cause more damage.

“The wooden toys segment is very small involving artisans from the lowest rung of the economy. This is not the way to be competing with China. We are GI tagged and a simple process of putting logos on these toys should suffice,” said Kadidal.“Toys in Channapatna,  especially non-electric ones, are manufactured by family members or with not more than 10 employees. They cannot afford to get these certifications. It is better for the government to step in and club units or allow distributors to get the certification,” said K B Arasappa, president of KASSIA.

In its fee structure for certification of toys, BIS has divided them into just two categories -- electric and non-electric. While the application, renewal application and annual licence fees are Rs 1,000 each, the annual marketing fee is set at Rs 59,000 for non-electric toys and Rs 88,000 for electric toys just for micro industries and much more for small scale and large-scale industries.Channapatna MLA and former CM H D Kumaraswamy tweeted on Monday: “Poor artisans will have to spend thousands of rupees on getting certification...This decision spells doom for cottage industry. I urge the Union government to withdraw this decision,” Kumaraswamy tweeted on Monday.

Now we are on Telegram too. Follow us for updates
TAGS
BIS Bureau of Indian Standard toys