The Board of Control for Cricket in India on Tuesday submitted before the Kerala High Court it has no plans to lift the ban imposed on cricketer S Sreesanth.

KOCHI: The Board of Control for Cricket in India (BCCI) on Tuesday submitted before the Kerala High Court it has no plans to lift the ban imposed on cricketer S Sreesanth.

In an affidavit to the High Court, the BCCI stated there is no new circumstance warranting the lifting of the life ban imposed on Sreesanth and to issue an NOC to play in the Scottish Premier League. The affidavit was filed in response to Sreesanth’s plea seeking a directive to the cricket body to lift the ban.

The BCCI had imposed a life ban on Sreesanth based on the recommendations by a disciplinary committee which found him guilty in the 2013 IPL spot-fixing scandal. 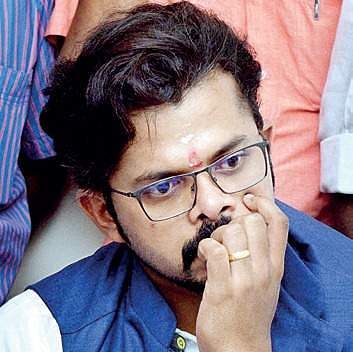 In his plea, Sreesanth said though the Delhi Sessions Court verdict in 2015 discharged him from a crime registered in connection with the spot-fixing case, the BCCI refused to lift the ban.

The BCCI affidavit stated Sreesanth, in his petition, did not reveal an appeal challenging the decision of the Sessions Court was currently pending before the Delhi High Court.

Besides, the Sessions Court decision to acquit the petitioner from criminal charges had no impact on the decision of the internal disciplinary committee of the BCCI to ban him from playing cricket tournaments organised by the BCCI or its affiliates, the affidavit said.

“The question before the Sessions Court was whether Sreesanth and other accused were guilty of penal consequences under relevant criminal statutes or not.

On the other hand, the question before the BCCI disciplinary committee was whether the petitioner was guilty of match fixing, corruption, gambling and violation of the internal disciplinary rules of the BCCI. The court had recognised the offence of match fixing and betting and the incidental conduct of players and bookies in furtherance of these activities,” said the affidavit

“The BCCI has a zero tolerance policy in matters pertaining to any form of corruption in cricket and took the decision not to lift the ban at its working meeting held on October 18, 2015, after considering the request of the Kerala Cricket Association,” said the affidavit  undersigned by BCCI chief executive officer Rahul Johri.

Stay up to date on all the latest Kerala news with The New Indian Express App. Download now
(Get the news that matters from New Indian Express on WhatsApp. Click this link and hit 'Click to Subscribe'. Follow the instructions after that.)
TAGS
S Sreesanth Board of Control for Cricket in India life ban