April 28 marks the first anniversary of the brutal murder of Jisha, a student of Ernakulam Law College, which triggered a series of protests against the then UDF government, severely denting its image

KOCHI: A year has passed since Jisha was brutally raped and murder at her makeshift house in Iringole. The incident which happened on April 28, 2016, wrung the state’s conscience and also created ripples in the political arena.

“How can I sleep peacefully when the person who brutally murdered my daughter continues with his life as if nothing has happened and that too under government’s protection?” Rajeshwari told Kochi Express. Jisha’s photos adorn the walls of the house.

Rajeshwari’s haunted eyes still search for answers. “I want to know for whom and why the accused murdered my daughter. The accused should be awarded capital punishment as soon as possible. I am not making any comments since the case is in the court. Why is the case dragging on?” she asked. “I have requested the court to award capital punishment to the 24-year-old Ameerul Islam,” she adds.

The accused is currently lodged at Kakkanad District Jail and the in-camera trial is underway at Ernakulam District Principal and Sessions Court.

Rajeshwari, Jisha’s elder sister Deepa and her 12-year-old son moved into the new house four months after the incident. Their old house on Vattoli Padi canal bund road still stands, a grim remainder of the brutal murder. Rajeshwari said, “We lived in the house for about 38 years, braving financial crunch and neighbours’ disdain.” Jisha had spent most of her adult life struggling to fulfil the dream of building a strong and safe house. “Jisha had tried to construct a house on this land which was handed over by Koovappady block panchayat. As per the agreement, the original documents were to be handed over after payment was made for the remaining one cent of land. After her death the government bought the remaining land and constructed the house. However, we have not received the deed and other documents yet,” says Rajeshwari. 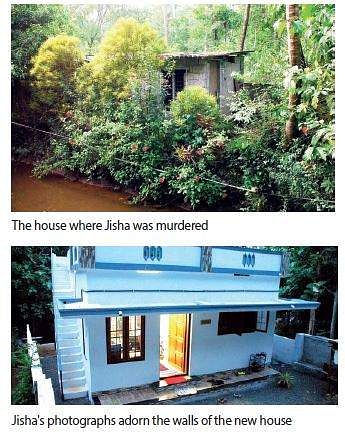 But, the new residence too it seems don’t give them a sense of safety. CCTV camera was installed after Rajeshwari was allegedly  threatened by some neighbours. Two women civil  police officers too have been posted at the residence. They will be deployed there till the completion of the case.

“Some persons attempted to eliminate me and my daughter. Weeks before Jisha was murdered, a  ‘bhai’ tried to run me down with a bike. But I escaped without injuries,” said Rajeshwari.  She said Jisha too felt somebody was trying to harm them. “She used to tell me that if anything happened to her I should fight to bring the culprits before law. But if anything were to happen to me, she would end her life,” she adds.

Responding to the allegations that she had received a huge of amount of money as donations from various persons including from the film fraternity, Rajeshwari said, all the  money we got is held in the joint bank account opened by the then District Collector M G Rajamanickam. “We had received a sum of Rs 8.25 lakh from the SCST Development Department. I used some of the money to buy gold ornaments for Jisha, who loved to wear jewellery, and gave some to Deepa,” she adds.

Rajeshwari said, she receives a sum of Rs 2,000 as interest for the money deposited by political party leaders at Perumbavoor Urban Co-Operative Bank and a monthly pension. “Many persons from whom I have not borrowed even a penny are now alleging that I am not paying them back!” she said. “There was nobody to help us. I had approached many including my kith and kin seeking help to pay Jisha’s fees. Some persons have been dragging in Congress leader P P Thankachan’s name into the case. But I respect him,” she adds.

The case is back in focus with the reinstatement of T P Senkumar as DGP by Supreme Court. The top cop had alleged serious lapses in the inquiry into the sensational case. In the affidavit submitted by him before the Supreme Court, Senkumar pointed out that an effective scientific probe had not been carried out in the case. “The fingerprints received by the special investigation team headed by ADGP B Sandhya had not been identified. Also, the chargesheet was submitted after verifying the hair and finger prints. A proper inquiry was not made into the presence of liquor in the body of the deceased,” said Senkumar. Hence with the reinstatement of Senkumar all eyes are on what will happen in the case.