For months together, this not-so-net-savvy mother from Thalassery thought her only son was suffering from depression and shuttled between hospitals seeking help to save him.

KANNUR: For months together, this not-so-net-savvy mother from Thalassery thought her only son was suffering from depression and shuttled between hospitals seeking help to save him. Doctors said he was going through a period of angst and will recover soon.But all her expectations were shattered as her 22-year-old son Savanth M K, an ITI student, hanged to death in May 2017.

Three months after the tragedy, Shacky realised it was not depression but Blue Whale, the notorious online game, that pushed her only son into suicide. The 50-day challenge, believed to have originated in Russia, instructs participants to perform increasingly dangerous tasks with the last step being taking his own life.
“He used to spend hours together playing on his mobile phone. Later, he started inflicting wounds on his arms with compass and blade. We were worried and took him to counsellors who told us he was passing through a difficult phase and advised us to spend more time with him. But little did we realise he was addicted to a psychopathic game and his behavioural changes were caused by the game,” she told “Express”.

“We were totally ignorant about the games and came to know about it only after newspapers started writing about it. We could have saved him if we had any clue. 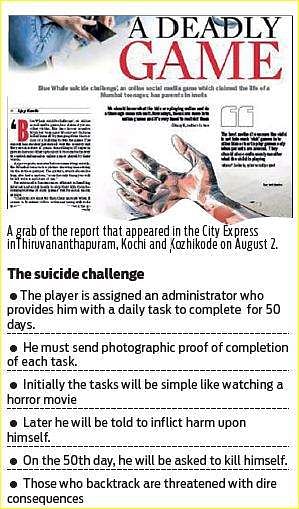 I request all parents to remain alert and check what their children do on their mobile phone,” she said.Institute of Mental Health and Neuro Sciences (IMHANS) clinical psychologist Suja Mathew said only parents will be able to detect whether their ward was addicted to net or online games.

“If a child spends more than two hours on a computer or a mobile phone, he or she is addicted to it. Parents need to keep a close watch on what the youngsters do with their mobile phones. Signs of depression and addiction to such games are similar.

In both the cases, they will show irritability and anger, prefer loneliness and withdraw from family activities. Parents have the sole responsibility and they should know what their children are doing,” she said.