The fever outbreak sweeping the state claimed the lives of six persons even as there was a spike in cases of dengue and other fevers.

THIRUVANANTHAPURAM: The fever outbreak sweeping the state on Friday claimed the lives of six persons even as there was a spike in cases of dengue and other fevers. 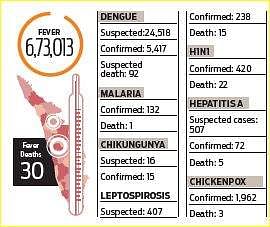 Two dengue deaths were reported from Pathanamthiwtta and Kozhikode. According to the Directorate of Health Services(DHS) report, two persons died of H1N1 in Malappuram and Kozhikode. While one person succumbed to fever in Kollam, another died of Hepatitis A in Thrissur.

Though there has been no let-up in fever cases, the Health Department yet again claimed the situation is under control. They said the sanitation drive has been intensified across the state. All the hospitals are fully geared to deal with any further outbreak, officers said.

12-yr-old girl dies of shigella dysentery
Kozhikode: A 12-year-old girl died owing to shigella dysentery in the district on Friday. Fida,12, of Thazheillath, Adukath, Kuttiyadi, is the deceased, the DMO said. A few days ago, a death was reported from Malappuram following which the DMO had issued an alert. Meanwhile, Sreeraj,29, of Edakandimethal, Nadaeri, died of dengue on Friday.

Now we are on Telegram too. Follow us for updates
TAGS
dengue death