The state government will launch a special initiative to donate land under  Life Mission, a comprehensive housing scheme announced by the government.

THIRUVANANTHAPURAM: The state government will launch a special initiative to donate land to the landless under the Life Mission, the comprehensive housing scheme announced by the government.
The Confederation of Indian Industry (CII) has indicated its willingness to associate with the project. The government is planning to make use of unused land under various departments in addition to land leased to plantations for the project.

A high-level meeting chaired by Chief Minister Pinarayi Vijayan recently decided to launch the initiative from October 2. As per the initial assessment, housing facilities will be needed for around five lakh households. The government will solicit the support of companies, industrial establishments, individuals and organisations to construct housing complexes as part of the Life Mission.

Already 123 acres have been identified for constructing 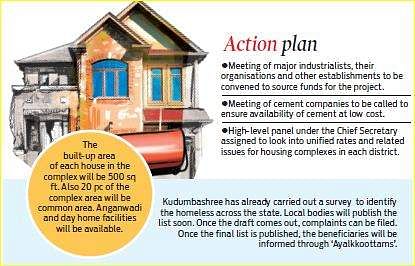 housing complexes. Attempts are on to find the remaining land. The government has also decided to make use of unused land under various departments for the project. District Collectors will be asked to identify land remaining unused with different departments.

A committee headed by the Chief Secretary will be established to fast-track the project. Also, efforts will be made to utilise land leased to plantations, for the project. The Life Mission aims to ensure housing facilities to three sections of people - homeless, landless and those who have not been able to complete work on houses despite government support. The project also aims to ensure livelihood to those without jobs and financial stability.

Now we are on Telegram too. Follow us for updates
TAGS
Life Mission Pinarayi Vijayan Housing scheme