Captivating in procession, crippled in captivity

Festivals in Kerala are spectacular with caparisoned elephants, percussion rhythm and fireworks.

KOCHI: Festivals in Kerala are spectacular with caparisoned elephants, percussion rhythm and fireworks. But when it comes to elephant care, Kerala’s record is pathetic.Much sought after for festivals, the gentle animal is left to fend for itself against the vagaries of nature. Though the Supreme Court has issued an order in 2015, directing to provide protective shelter for captive elephants, a majority of them are tied to a tree for 23 hours a day, exposed to the elements and chained in a pool of filth.

Standing continuously in unhealthy conditions make the animals vulnerable to diseases. The issue raises serious concern as 40 elephants have died in the state over the past one-and-a-half years due to ill health.
The elephants tethered in unhygienic places are more vulnerable to feet diseases and develop ulcer in their intestines. The death of these majestic animals reflects the sorry state of their lives. The elephants that died during the period are in the age group of 22-50 years, while the average life expectancy of an elephant in a healthy ambience is 80 years.

Though there is an alarming rise in the mortality rate of elephants, the authorities  are dragging their feet in providing shelters for the giants, though the tuskers rake in the moolah for their owners during the festival season. 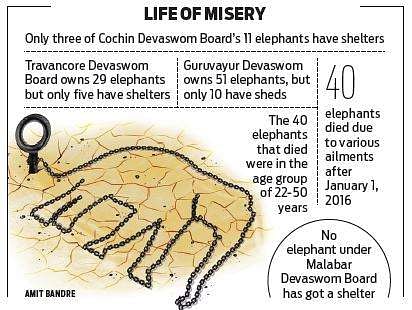 K Sivaraman, an animal rights activist, said 51 elephants are tethered in the 11-acre elephant sanctuary owned by Guruvayur Devaswom at Punnathur Kotta.The living conditions of these tuskers is pathetic. During the rainy season, the accumulated elephant dung and other wastes get mixed with rainwater.

The tuskers are made to stand in the slush making them vulnerable to diseases. “Summer is the cruellest season for these giants as they are made to stand under the scorching sun for hours together,” he said.
“Though there are 47 female elephants in various parts of the state, none of them has got a proper shelter,” said K K Venkitachalam, secretary of Task Force.

Guruvayur Devaswom Managing Committee spokesman Murali said the devaswom has completed the construction of shelters for 10 elephants. The construction of 10 more shelters at a cost of `90 lakh is under way. It will be completed in a time-bound manner. Since there are enough trees in the sanctuary, it serves the purpose of shelters, he said.

As per the Kerala Captive Elephant Management Rule, 2012, the owners should provide two trained mahouts and a proper shelter for each elephant. Though there is a provision to slap a fine on the owners who fail to provide shelters for elephants, no one has been fined till date, said an animal rights activists.
V Sasikumar, general secretary of Kerala Elephant Owners’ Federation, said the federation has directed elephant owners to provide shelters for all elephants.