Ground-hugging Malayalees give airlines the blues

Long before technology shrunk geographical distances, Malayalees were known for their wanderlust, with the common refrain being one  might well run into a Malayali even in some of the remotest corner

KOCHI: Long before technology shrunk geographical distances, Malayalees were known for their wanderlust, with the common refrain being one  might well run into a Malayali even in some of the remotest corners of the globe. However, despite the Malayalees’ USP as globetrotters, the fact remains they are a most disinclined lot when it comes to catching a flight to a destination inside Kerala.

An aggregate occupancy rate of the Air India flight connecting Thiruvananthapuram and Kochi and vice-versa hardly exceeded the 50 per cent mark in the last three years. Replying to a question from A Sampath MP, the Ministry of Civil Aviation(MoCA) said the average occupancy for AI’s Thiruvananthapuram-Kochi flight (AI 466) was 58 per cent and the corresponding figure for Kochi-Thiruvananthapuram sector was just 53.1 per cent during July 2014-June 2017 period. 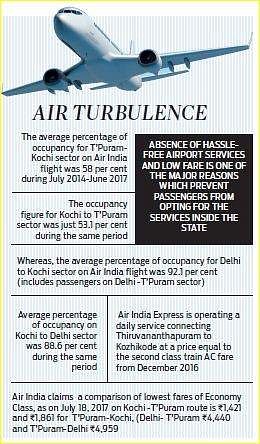 Whereas, the average occupancy for Delhi-Kochi sector on Air India flight was 92.1 per cent (includes passengers for Delhi to Thiruvananthapuram sector) and average  occupancy for Kochi-Delhi sector was 88.6 per cent during the same period. It underscores the fact though Malayalees are indeed travel-friendly, the domestic routes inside the state are yet to emerge as viable business routes for airline companies operating in the state.

According to Air India Express CEO Shyam Sunder, “the AIE has been operating a daily service connecting Thiruvananthapuram with Kozhikode in the morning and vice-versa in the evening at a price comparable to the second class AC train fare from last December.
However, the service is yet to emerge as a profitable or viable one for the company, for which the company still needs more passenger support”.

Biji Eapen, national president, IATA Agents Association of India, said the airline services connecting Kochi-Thiruvananthapuram-Kozhikode is not a profitable sector for the airline companies as majority of people opt to fly on this route only in emergency situations. An average passenger has to report at the airport at least two hours before the flight  and he needs at least an hour to get back to the city centre after he lands at the airport. Significantly, he can reach a destination in central Kerala if he takes a taxi from the state capital which takes roughly the same travelling time. There should be  hassle-free airport services and relatively cheaper airfares to draw Malayalees to the air services inside the state. Then only can these routes emerge as viable business routes, Eapen said.

Air India has been charging approximately `3,000 for an economy class ticket for the Thiruvananthapuram-Kochi flight while it is around `5,000  for a passenger (by e-coupon) between New Delhi and Thiruvananthapuram, a distance of over 2,200 km. This also has to  change. Only then will the services connecting airports inside the state will become attractive to  passengers, said Sampath MP.