With eight more people succumbing to fever on Saturday, the official number of deaths due to viral fever in the state has risen to 55, even though unofficial figures indicate a higher death toll.

THIRUVANANTHAPURAM: With eight more people succumbing to fever on Saturday, the official number of deaths due to viral fever in the state has risen to 55, even though unofficial figures indicate a higher death toll. Those who died on Saturday included a soldier referred to the Medical College Hospital from the Pangode Military Station here. 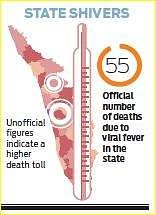 Thrissur: A 25-year-old woman admitted to the Medical College here with symptoms of fever died on Friday evening. According to deputy medical officer Baby Lekshmi, the victim is Priya, wife of Sanoj, a resident of Karalam, near Irinjalakkuda. With this the number of fever-related deaths in the district during the past one month has risen to six. The reason behind Priya’s death is yet to be ascertained. The serum sample has been sent to the microbiology lab for testing.

The death is suspected to be caused by rat fever. However, the confirmation can be made only after the detailed report is received, she said. The case was referred to the Medical College from a Cooperative Hospital here, she said.  As per the details with the Health Department officials, of the total fever cases reported, there are as many as 692, including 281 confirmed and 411 probable cases of dengue.