Around 20 people were hurt after the police resorted to lathicharge against protesters, including women and children

KOCHI:The ongoing stir by local residents against the IOC’s LPG terminal at Puthuvype turned violent again on Sunday with the police resorting to lathi-charge against protesters, including women and children. About 20 persons were seriously injured.

They were shifted to the Ernakulam General Hospital and Kalamassery Government Medical College Hospital. Nearly 100 protesters - including 69 women - have been detained at the AR Camp, Kalamassery.

Meanwhile, the Congress has called a dawn-to-dusk hartal in Puthuvype on Monday protesting the police action. The Welfare Party, the CPI (ML) Red Star and the Matsya Thozhilali Federation have declared a hartal in Ernakulam district on Monday.

In an order last week, Ernakulam District Collector K Mohammed Y Safirulla had asked the police to give a security cover to the LPG terminal site. Following this, they resorted to lathi-charge in order to disperse the agitators.

Meanwhile, Chief Minister Pinarayi Vijayan has called a meeting of all stakeholders at his office in Thiruvananthapuram on Wednesday to find an amicable solution. Safirulla, in a statement here, said the IOC is deferring work till Wednesday. “Work will be deferred till then to facilitate talks, so the protesters are asked to immediately withdraw,” he said.

Chairman of Janakeeya Samara Samithi M P Jaya Ghosh alleged the contractors had resumed work against the District Collector’s order on Sunday morning. “A group of protesters laid siege to the IOC terminal. However, stones were pelted at them inside the terminal. Later, police personnel who reached the spot also started a lathicharge without any provocation,” he said. Jaya Ghosh was also taken into custody.

According to the police, the protesters attempted to barge into the plant and pelted stones at the LPG work site, which had received clearance from the National Green Tribunal. The Kerala High Court had also issued an order not to disrupt the work.

On Friday, the police arrested several agitators including AAP convener C R Neelakandan staging protests in front of the High Court. Last week, 204 protesters were arrested and removed from Puthuvype. The arrested persons were booked under IPC Sections 188, 283, 143, 145 147 and 149 and later released on bail.

A section of local residents has been agitating against the proposed IOC terminal in Puthuvype for the past four months and a large posse of police has been deployed in the area to avoid any untoward incidents.

Kochi: Archbishop of Verapoly Joseph Kalathiparambil on Sunday condemned the move to suppress people’s protest against IOC’s LPG Plant at Puthuvype by using police force. “The attitude of the police which tried to arrest even women and children needs to be corrected. Instead of solving the issues peacefully, the police resorted to violent measures against the people’s protest. Such incidents should not take place again,” the Archbishop said in a statement. 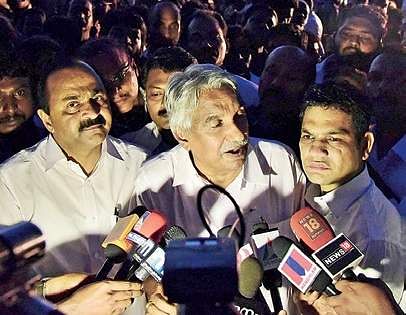 Kochi: Condemning the police action on protesters, former Chief Minister Oommen Chandy said the people’s protest could not be suppressed. “Police manhandling of residents is highly condemnable,” he told reporters. “No government can move forward by suppressing mass agitation in Kerala. The Chief Minister has decided to hold a meeting in the issue, which is a welcome step, he said.

Nearly 100 protesters - including 69 women - have been detained at the AR Camp, Kalamassery

A group of protesters laid siege to the IOC terminal. Stones were pelted at them inside

Last week, District Collector K Mohammed Y Safirulla had asked the police to give a security cover to the LPG terminal site

T’Puram: Kerala Swathanthra Matsya Thozhilali Federation (KSMTF) and National Fishworkers Forum (NFF) extended their support to the protest by fish workers and local residents against the IOC plant at Puthuvype. The leaders of the organisations demanded the government to stop using police force to suppress the popular protest. According to general secretary of NFF T Peter, the plant was in violation of Coastal Regulation Zone notification and the state should take immediate steps to shift the plant. General secretary of KSMTF Jackson Pollayil demanded the government to initiate talks with protesting public.