Vigilance sleuths on Monday arrested a village officer and a field assistant for taking a bribe from a quarry owner. 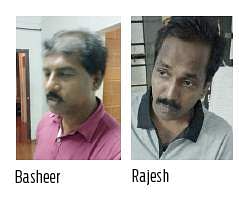 The complainant was Sivakumar of Shine Villa, Thamarassery, Kozhikode, who wanted to start a quarry. The accused demanded Rs 10 lakh bribe or 25 per cent stake in the quarry in return for possession certificates for the proposed quarry land.

Sivakumar agreed to give Rs 10 lakh and the accused asked him to pay Rs 50,000 as the first instalment.
Basheer received the amount and handed it over to Rajesh when the Vigilance sleuths intervened. The Vigilance team was led by Kozhikode unit DySP G Sabu.

Stay up to date on all the latest Kerala news with The New Indian Express App. Download now
TAGS
Kozhikode Village officer bribe