Police, in the case of Sreejith who died on Monday following alleged custodial torture, seem to have failed to follow the procedures required while taking a person into custody.

KOCHI: Fingers are being pointed at the police again. For the police - in the case of Sreejith who died on Monday following alleged custodial torture - seem to have failed to follow the procedures required while taking a person into custody.The Kerala State Human Rights Commission (KSHRC) itself has found there were lapses from the side of police officers as they failed to produce Sreejith before the Magistrate Court after having taken him into custody.

“Police officers have neither recorded the arrest of Sreejith nor issued the arrest memo. Besides, the relatives of the person taken into custody were not informed. The preliminary inquiry suggested the police failed to produce the person before a Magistrate,” said KSHRC acting chairperson P Mohanadas. Those who brought Sreejith to the hospital were identified as police officers despite them being in plain clothes.

The Commission chairperson visited Sreejith at the private hospital on Monday. The KSHRC has directed an inquiry be conducted by an officer in the rank of SP and a report submitted in this regard. The Commission also directed the Varapuzha SI to appear before it in its sitting at Aluva on April 23. As per the Supreme Court guidelines, the person arrested, detained or being interrogated has a right to have a relative, friend or well-wisher informed as soon as practicable of the arrest and the place of detention or custody. The person arrested should be told of the right to have someone informed of the arrest, as soon as the arrest or detention is made. However, all these have been flouted in Sreejith’s case. 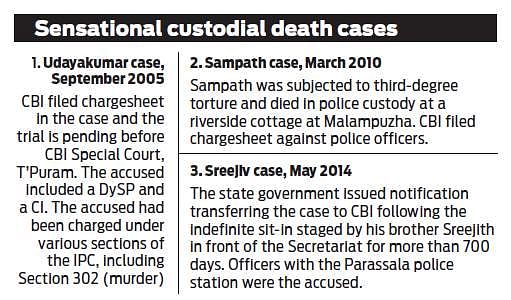 Former KSHRC chairperson J B Koshi said, though there were many good officers in the police, the force comprises a few officers who have a criminal background and these persons were behind these kinds of incidents. “Effective training should be imparted to enhance the behaviour and attitude of the police,” he said.

Chennithala demands action against cops
T’Puram: Opposition Leader Ramesh Chennithala has urged the government to take immediate action against the police officers responsible for the alleged custodial death of Sreejith. In a statement, Chennithala said the Pinarayi Government was protecting criminals, including the police force. “Those being taken into police custody are not returning alive. It has become a routine thing in the present government,” Chennithala said. He also pointed out Sreejith succumbed to injuries on the same day when his relatives approached state human rights commission alleging the police torture.

‘Gross violation of human rights’
Kochi: A complaint by the victim’s wife to the commission stated she witnessed the cops torturing her husband who was denied food, drinking water and even treatment for two days. “A preliminary investigation has found gross violation of basic human rights in Sreejith’s case,” the commission said. Sreeijith was taken into custody along with nine others, when the gang allegedly broke into a house in Varappuzha and assaulted the family members. Following the incident, the head of the family, K M Vasudevan, committed suicide.Meanwhile, a tense situation prevails in Varappuzha where a huge number of people have converged in front of the police station shouting slogans against the police.

Now we are on Telegram too. Follow us for updates
TAGS
Sreejith Custodial death