Shenoy was admitted to the hospital on January 29 with kidney complaints. He died of cardiac failure.

UDUPI/KOCHI: Veteran journalist and the trustee of Manipal MAHE Trust and Dr TMA Pai Foundation, TVR Shenoy, died in Manipal on Tuesday. He was 77. Shenoy was admitted to the hospital on January 29 with kidney complaints. He died of cardiac failure. 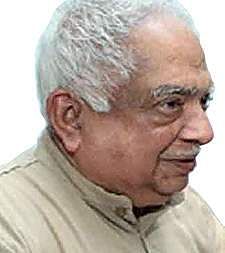 Shenoy, who entered the media world through the Indian Express, was the Delhi Bureau Chief of Malayala Manorama for a long period. He also served the Manorama Group as the editor of The Week magazine. He also served the Sunday Mail daily as its editor in the 1990-92 period. He was also the executive committee member of Prasar Bharti.

The veteran journalist, who has an overall experience of more than five decades, was also known as an efficient economic and political observer. He has contributed columns in various foreign newspapers and magazines. His articles were known for the in-depth analysis of the topics along with a unique writing style. He has also delivered lectures in various universities and venues, including Oxford University. The government awarded him the Padmabhushan in 2003.

Shenoy, who hails from Ernakulam, is also the winner of Alavita Commander Award presented by the King of Morocco. He was also the member of the board of trustees of India First Foundation.

He is survived by wife Sarojam and children Sujatha and Ajith. Chief Minister Pinarayi Vijayan and other prominent personalities condoled his death.