Over 2,600 kids sexually abused in one year in Kerala

Even kids below the age of five were not spared

THIRUVANANTHAPURAM: While the safety of kids is always a reason for worry, things are proving to be far worse. About 2,692 cases of child sexual abuse were registered in Kerala from March 2017 to March 2018. Of this 1,282 cases were registered via Childline, an NGO active in securing the rights of children.

A study conducted by the NGO in cases they have dealt with have brought to light shocking statistics. Even kids below the age of five were not spared by the predators. A total of 69 such cases came to the attention of which 56 were girls. About 397 kids from the age of 6 to 12 were also found to be abused and this comprised 300 girls. The most vulnerable age group was 13-15 as 597 children of this age bracket (133 boys and 464 girls) were sexually abused. 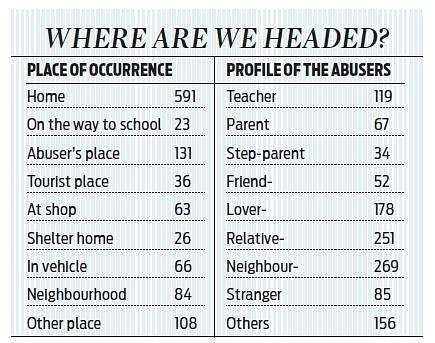 The studies also showed most of the abusers were known to the kids. Only 85 strangers were found to be involved in abuses. 269 cases involved neighbours, while relatives contributed to 251 cases. In about 101 cases, parents/step-parents were the culprits. The most number of abuses took place at the victims’ houses (591) while about 156 incidents took place at schools. Meanwhile, in the online sexual abuse cases dealt by Childline, boys outnumbered girls. About 63 per cent of the abused were boys and the most vulnerable age group belonged to the bracket of 11-15 years.

Now we are on Telegram too. Follow us for updates
TAGS
Sexual abuse Child Sex Abuse Kerala child abuse cases