They were clueless when their daughters overlooked them and renounced their faith to undertake a new journey.

KOCHI: They were clueless when their daughters overlooked them and renounced their faith to undertake a new journey. The parents, who are still annoyed, believe it is their duty to ensure "it doesn't happen to others". They have decided to form an association to fight for justice and against the alleged 'Love Jihad' where they can share problems and seek the support of others.

The movement initiated by K M Ashokan, father of Akhila alias Hadiya who embraced Islam to marry a Muslim, and K Bindu, mother of Nimisha alias Fathima who was among the missing 21 from the state who reportedly joined the Islamic State along Afghan-Syria border, has the backing of nearly 30 parents who faced similar issues.Ashokan and Bindu urged the support of Keralites for the movement to prevent similar "unfortunate" incidents to other families. 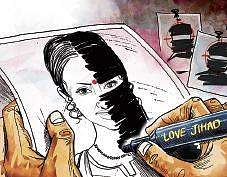 "We met several parents and collected data from them. We've to identify the type of issues faced by the parents and will decide who among them needs the most attention. We'll also take steps for legal action to end the menace which has become a threat to our society. Those who support our move were parents who lost their children like us," Bindu told Express.

Ashokan and Bindhu said the parents who lost their daughters through conversion were facing threats. They asked for police protection to the families. They said there was no political backup for their move as of now, but Ashokan said any political party was welcome to extend their support. “We’ll seek help from anyone to get our daughters back. I wish it won’t happen to any other parents of a girl child in the country. Hence, we decided to form an association,” he said.

Bindu said she could not trace her daughter even after two years and has not got any information about her whereabouts. “I want my daughter back. I’d sought the government’s help to trace and repatriate my daughter, but my efforts went in vain. Though I made several attempts to meet Minister of External Affairs Sushma Swaraj, it failed,” said Bindu.

Now we are on Telegram too. Follow us for updates
TAGS
Akhila Nimisha Love jihad