Hospital sources said that the primary forensic report suggested severe injury caused in the back of the head, which resulted in a blood clot in the brain.

THRISSUR: Amid allegations that there is an effort to sabotage the probe into the death of tribal youth Madhu, who was lynched by a mob in Attapadi on Thursday, the post-mortem revealed that the primary cause of death was brain haemorrhage and broken ribs caused by the assault.The post-mortem was carried out under strict supervision of the police and captured on camera. Forensic head Dr Balaram, Dr Sheik Shakir Hussain and Dr P A Shiju did the post-mortem at Thrissur Medical College on Saturday.

Hospital sources said that the primary forensic report suggested severe injury caused in the back of the head, which resulted in a blood clot in the brain. Ribs were also found to be broken. There were several marks indicating a severe assault, which that caused internal bleeding.The post-mortem began at 9.30 am and was completed by 12.30 pm. The report will be handed over to the police next week. Madhu's body was then taken to his village.

Thrissur Range IG M R Ajith Kumar, who is in charge of the investigation, acknowledged the facts in the post-mortem report. He said those accused in the case will be booked under various sections of the IPC and will be charged under relevant sections of the SC/ST Act as well.Eleven people have been arrested so far and four others are still absconding, police sources said.

Earlier, Tribal Welfare Minister A K Balan, who visited the Thrissur Medical College, said that Madhu's lynching has brought shame to the state. "The government will take strong action to ensure that no such incidents take place against tribals or Dalits in the state. Besides bringing all the culprits to book, the government will provide all support and protection to Madhu's family," said Balan.

Health Minister K K Shylaja said that other than tribals, nobody else will be given permission to enter the forest. Strong action will be taken against those who intruded into the forest and killed Madhu, the minister added. 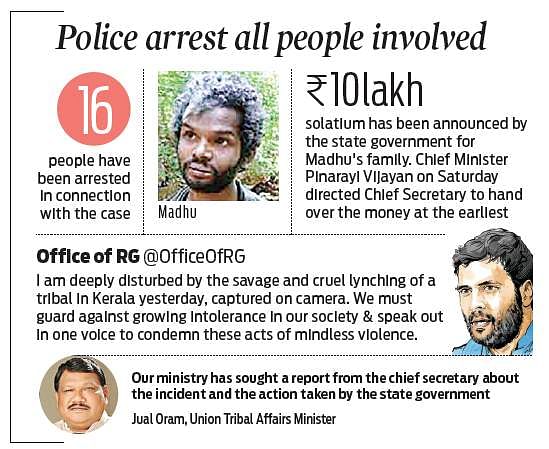 Now we are on Telegram too. Follow us for updates
TAGS
Kerala tribal lynching Attapadi tribal youth post-mortem