The Sabha also submitted a petition to the Chief Minister through Devaswom Minister Kadakampallli Surendran requesting him not to change the existing rituals and customs at Sabarimala.

KOTTAYAM: Even as hearing is progressing in the Supreme Court over allowing women of all age groups to enter Sabarimala, a meeting of the Kshatriya Kshema Sabha state committee requested not to drag the Travancore royal family into the issue.

According to Sabha office bearers, Sethu Parvathi Bai, a member of the Royal family, had visited Sabarimala along with her sons Chithira Thirunal Balarama Varma and Uthradam Thirunal Marthanda Varma, only after the stipulated age. “Moreover, the ‘queen’ had not stepped through the holy 18 steps to reach the shrine. The visit was not during the pilgrim season as well. Hence, matters pertaining to her visit to Sabarimala should be avoided during the hearing in the court,” they said.

Sabha, through a resolution, has demanded no move that goes against the tradition of the temple should be taken. The Sabha also submitted a petition to the Chief Minister through Devaswom Minister Kadakampallli Surendran requesting him not to change the existing rituals and customs at Sabarimala. A high-power committee meeting of the Sundaravilasam Kottarathil Sabha, Thiruvananthapuram, will be convened on August 11. 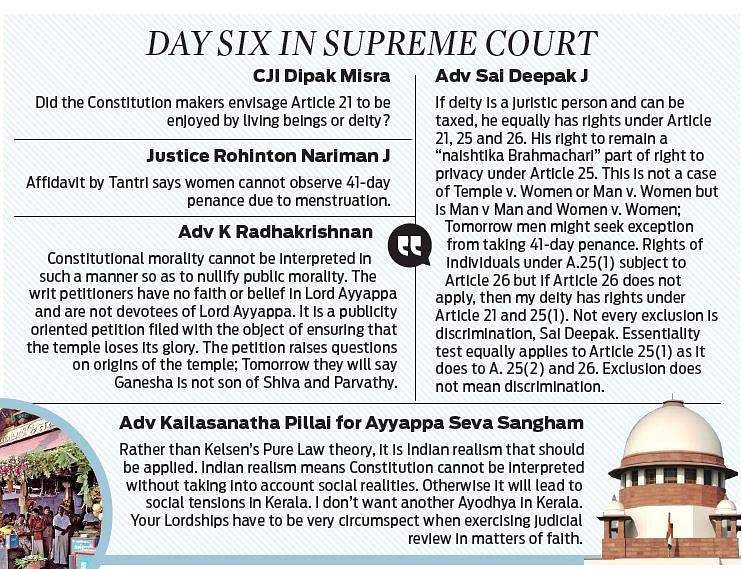 Now we are on Telegram too. Follow us for updates
TAGS
Sabarimala Women's entry