Leela Menon, who stretched the boundaries of journalism as a scribe of Express, passed away at 8.30 pm on Sunday after prolonged illness at an old-age home here. 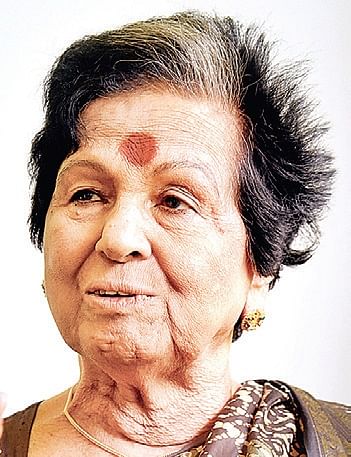 KOCHI:Leela Menon, who stretched the boundaries of journalism as a scribe of Express, passed away at 8.30 pm on Sunday after prolonged illness at an old-age home here. She was 86.The body will be kept at the Ernakulam Town Hall between 10 am and noon on Monday. Cremation will be held later at the Ravipuram Crematorium.

After joining as a clerk at a post office in 1949, she became a telegraphist. An interview of her as the only woman telegraphist at that time sparked the desire in her to become a journalist.In 1978, she joined as sub-editor of Indian Express in Delhi and moved to Kochi in 1982. At a time when women were hesitant in pursuing a career in journalism, Leela Menon, with her exclusives and scoops, stood out and opened the doors for several women, especially in Kerala, to follow in her footsteps.

Leela Menon served as bureau chief of Express at Kottayam till 1990, and later moved to Kochi and served there till 2000. Later, she also worked with The Hindu, Outlook, Vanitha, Madhyamam, Malayalam and Kerala Mid-Day Times. In the twilight of her career, she was the Chief Editor of Janmabhumi.
Leela Menon was born in Vengolla, near Perumbavoor in Ernakulam, on November 10, 1932. Her husband Major Bhaskara Menon, predeceased her.

Now we are on Telegram too. Follow us for updates
TAGS
Leela Menon

One in three police stations in India yet to get single CCTV camera: Report

Heavy rains in Palghar; two washed away in flood waters, one injured in house collapse