Kerala floods one month after: Lasting scars and uncertainty in Kannappankundu, Karinchola

The Kannappankundu river got split during the heavy rainfall, with one arm forcing down across the houses along its banks. 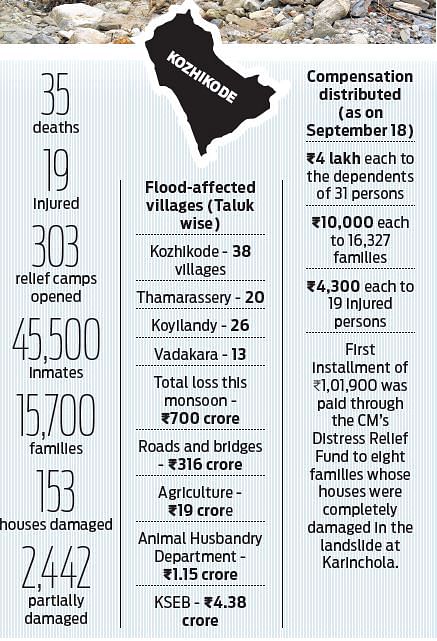 KOZHIKODE: A month since landslides and floods caused massive destruction in Kannappankundu and Karinchola, the clouds of gloom have not lifted from the lives of people here. Many have lost their savings and are staring at a bleak future. Some have the added anguish of having lost family members or dear ones.

Thudarapuzha Mujeeb and his wife Shahina from Kannappankundu are still in the shock of their entire life savings being washed away in a few minutes. Their new house which was set for housewarming on August 17 was completely damaged in the floods on August 8.

Disoriented by uncertainty and fear, Shahina said, “We had invested all our savings into the house. We sold a piece of land, a tipper lorry and everything we had to make this dream come true. Despite having health problems, I worked as a pharmacist for fulfilling this wish. But we lost everything and life has been set back to zero,” she said. The family left the relief camp with the `10,000 compensation.

The floodwater had completely flattened the house of Ayeshabi Uppunikkal. She was away with the family on that fateful night. “Our house was the first concrete house in the area. Now, people will hardly believe a house existed here,” said Ayeshabi.  Kalathil Khasim lost his two-storey house and all the valuables inside it. Half the cows in his cattle shed were washed away. The situation is particularly grim in Karinchola hills in Kattippara grama panchayat where a major landslide occurred on June 14, killing 14.

The family of Abdul Salim, 35, who had been employed overseas for more than nine years, stares at an uncertain future. He had come home from Riyadh just a few days earlier to celebrate Eid ul Fitr with his family.

Salim and Sareena lost two children, Dilna Sherine, 9, and Muhammad Shahbaz, 3, in the landslide. Salim has been bedridden after he sustained a spinal code injury in the incident. Sareena and their eldest son Muhammed Shamnas also suffered injuries. The family has moved to a rented house arranged by the panchayat, 3 km away from where their house once stood.“We got `4,300 each as medical assistance from the government,” said Salim.

Reminders of the unthinkable

The Kannappankundu river got split during the heavy rainfall, with one arm forcing down across the houses along its banks. Though fallen trees, rocks and debris that caused the diversion of the river’s flow were later removed and the river contained, the sight of the place is reminiscent of the magnitude of devastation caused by the floods.

Now we are on Telegram too. Follow us for updates
TAGS
Kerala floods flood relief Kannappankundu Karinchola Kerala floods one month after