Nearly three months after the nun made the rape allegation, Jalandhar Bishop Franco Mulakkal was interrogated at the Tripunithura Crime Branch SP Office for more than seven hours on Wednesday. 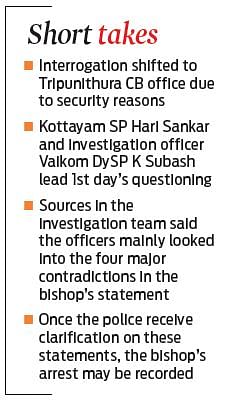 KOCHI: Nearly three months after the nun made the rape allegation, Jalandhar Bishop Franco Mulakkal was interrogated at the Tripunithura Crime Branch SP Office for more than seven hours on Wednesday.
While it is perhaps for the first time that a bishop was subjected to such a marathon questioning in Kerala, the police said the interrogation would continue on Thursday.

The bishop, who reached Kerala after receiving a notice from the interrogation team, arrived by 11 am. A team headed by Kottayam SP Hari Sankar and comprising investigation officer Vaikom DySP K Subash conducted the first day’s questioning, which concluded by 6.30 pm.

“The bishop has been directed to appear at 11 am on Thursday at the same venue. He’s cooperating with the officers. Further steps in the probe will be initiated only after the interrogation is completed,” said Hari Sankar, who is overseeing the investigation.

Sources in the investigation team said the officers were mainly looking into the four major contradictions in the bishop’s statement. He had earlier given a statement to them that he did not know the victim. Besides, he stated the nuns could not leave their convent alone during night and the victim could not have come to his room at the guest house at Kuravilangad.

His argument that he had not stayed at the guest house is also contradictory as its register clearly states he had stayed on the days mentioned by the victim in her allegation, said an officer. “Once we receive clarification on these statements, the bishop’s arrest will be recorded,” said an investigating officer.

Though the interrogation was initially scheduled to be conducted at the Vaikom DySP’s office, it was shifted to Tripunithura due to security reasons.  In a complaint to the police, the nun had alleged she was raped and sexually exploited 13 times by the bishop since May 2014.Meanwhile, a group of AIYF workers jumped in front of the bishop’s car while he was returning from the CB office and raised slogans against him.

GDP likely to grow more than 9.5 per cent in FY22: SBI research report