Since no political party was willing to back them, the protesting nuns had to rely solely on the civil society’s support to expose the injustice meted out to them. 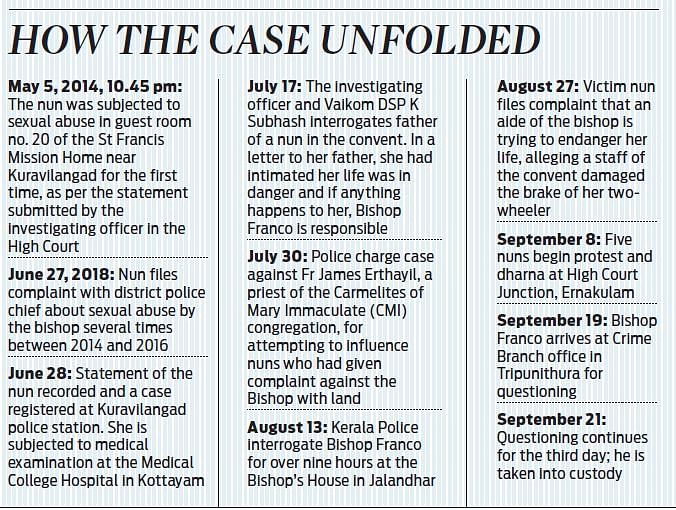 KOCHI: A combination of dogged determination and indomitable will encapsulates the fortnight-long protest launched by five nuns here which successfully culminated in the arrest of  Bishop Franco Mulakkal.

Since no political party was willing to back them, the protesting nuns had to rely solely on the civil society’s support to expose the injustice meted out to them. Besides braving the mind game, they had to travel a gruelling 100 km every day in bumper-to-bumper traffic - from their abode at St Francis Mission Home, Kuravilangad to the protest venue at the High Court Junction here.  This was easier said than done- the nuns had to get ready at the crack of dawn and embark on the return journey at dusk.

The daily grind drained them physically. Compounding their woes, they had to endure open hostility from fellow inmates of the convent. Further, they were accused of denigrating the Church. It was the unstinted support extended by the civil society which resulted in the truth prevailing ultimately.

Also Read:  Protest to continue until justice is served

Sr Anupama, 30, was serving at St Vianna Convent, Gurudaspur from where she was shifted to St Francis Mission Home, Kuravilangad on April 1, 2018. On her return to Kerala, she was given the charge of the hostel and was working at an old age home run by the Convent at Kuravilangad.Sr Alfi, 36, was working as a teacher at St Joseph Convent School, Bihar before arriving at the convent in Kuravilangad on April 6. She worked at St Josephs Convent, Bihar and before that, worked for four years as a librarian at St Assisi Convent, Jalandhar.

Sr Josephine, 42, had been working at St Thomas School, Bihar as a teacher for four years. On April 6 she arrived at the convent in Kuravilangad. Earlier she worked as a teacher at Assisi Bhavan Trinity College, Punjab for eight years.

Sr Ancita, 35, was attached to the St Francis Mission Home at Kuravilangad for the past three years. Earlier she worked as a teacher at St Thomas Convent School in Bihar for a year.Sr Neena Rose, 30, was staying the convent in Kuravilangad for three years. She was working at the old age home run by the convent and where Sr Anupama joined recently.

They were the first to stage a protest against Franco, which later attracted many people to join them. “Sitting here and watching people from different parts of the state coming and offering support gave us hope and confidence. We returned to our convent every evening with this confidence. With the confirmation of the arrest, we will be ending our protest at the venue but we still have a long way to go,” said Sr Anupama.

“It has been draining physically, mentally and emotionally. We had two options - to ignore the victim’s trauma and bear the pain or to stand shoulder to shoulder with her and fight for justice. We felt it was our duty to fight for the rights of nuns who have been restrained in the name of the vow of obedience. The support of the civil society has given us the much-needed willpower. We are no longer afraid of the consequences of the protest. The future may be bleak, but our struggle for justice will indeed pay off,” said Sr Alfi.