BJP to woo fishermen with an ambitious vision document

The BJP has already announced that there will be a separate ministry for fisheries at the Centre if the NDA comes back to power.

THIRUVANANTHAPURAM: The BJP state unit will present a fishermen vision document to Prime Minister Narendra Modi. BJP Thiruvananthapuram district president S Suresh told Express: “We will be presenting the document to the PM when he will be here in the district. The document has guidelines pointing to the welfare measures of the fishermen.” BJP vision document is aimed at improving the lives of the fishermen community, who is fighting in the tough sea against all odds. The party has contemplated that it should do something with specific data for the welfare of the community.

The BJP has already announced that there will be a separate ministry for fisheries at the Centre if the NDA comes back to power. The vision document primarily contains the activities to be carried out by the proposed ministry.

Former Chief Secretary C V Ananda Bose, who is in charge of the vision document, told Express: “The PM and the BJP are keen to work out a proper plan for the welfare of the fishermen community in the state. We have formulated several plans and programmes aimed at the upliftment as well as providing social security to the community.”

The vision document proposes Rs 1-crore accidental death insurance compensation to fishermen, who die during fishing. The document also envisages a chain of Kerala fish restaurants, named either “Kadalamma” or “Chakara,” and promotes it as an international brand on the lines of global brands like KFC or Dominos. The document proposes levying CESS from all the movements across and above the sea or mineral wealth, which includes air travel, container/shipping movement, and international cable operators and communication giants, who have set up under-sea cables.

There is also focus on developing coasts across the state on the lines of French Riviera. Says Anandabose: “Across the world, sea-facing properties are the most expensive. Once we develop the sea coasts of our state into world-class properties, the whole area will be developed, increasing the cost and value of the properties, which will, in turn, elevate the status of the area. A part of the profit so garnered on account of the development will be transferred to the fishermen benefit fund.”

Another proposal in the document is to provide quality education to fishers’ children in medical colleges and prestigious institutions such as IITs, IIMs.It also envisages providing immediate medical assistance to fishermen in case of accidents. It also envisages formation of a coastal corridor on the lines of industrial corridor. 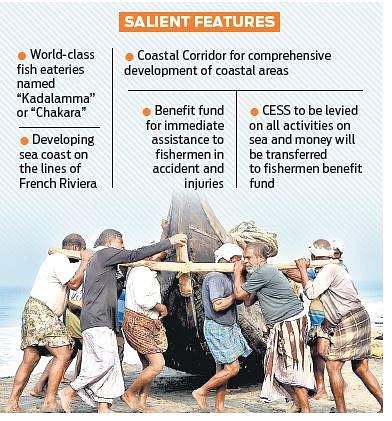