Even in the 2014 Lok Sabha polls, Malappuram stood by IUML giving a record margin victory of 1.94 lakh votes to its candidate E Ahmed.

MALAPPURAM: For 71-year-old Gopalakrishnan Nair, EMS is all that he knows about Communism. Nair grew up at Elamkulam in Malappuram as a neighbour of legendary Elamkulam Manakkal Sankaran Namboodiripad witnessing how he scripted a new political era in the history of Kerala.

Decades have passed since the first Communist government was formed in Kerala under the leadership of EMS in 1957 and Gopalakrishnan has seen the CPM becoming a formidable force in the state. But he believes the party has failed to make a considerable influence on the voters in Malappuram constituency where the Indian Union Muslim League(IUML) holds the sway.

As the LS poll campaign hots up, Nair is sceptical of the LDF’s chances of victory  in Malappuram in the coming elections though he feels it will be a tight contest this time between the CPM and the IUML.

“I have grown up seeing EMS and how Communist parties evolved in the state. My politics has been simple and I have always been with the Left. But it’s the IUML that has become a major force in the constituency over the years,” says Nair.

Sarafuddin, a 40-year-old mason from the area, shares Nair’s view. “It’s a fact the people of Malappuram  yearn for  change. But at the same time, they don’t want to give up on Kunjappa, as  IUML stalwart P K Kunhalikutty is known in these parts).  Ultimately, Kunhalikutty is going to win the polls by a good margin though LDF candidate V P Sanu will put up a good fight,” he says.

Though simmering heat has dampened poll campaign during peak daytime, people gathered in front of bus stops and tea shops all along the NH are hotly discussing elections mainly fought between LDF and UDF candidates. They don’t think the BJP will put on a strong show in the constituency.

“There are certain pockets in the constituency where the BJP has a strong base. BJP candidate Unnikrishnan master will get those votes but the party’s vote percentage is not going to increase considerably,” said Samad of Angadipuram.

Of the 17 general elections held in Malappuram that included erstwhile Manjeri constituency, IUML had won 16 times. It was only in the 2004 Lok Sabha polls that the LDF could upset the IUML’s apple cart when CPM’s T K Hamza defeated IUML candidate K P A Majeed by a margin of 47,743 votes. “Malappuram is an IUML stronghold. After every election, the margin of victory of IUML candidates sees a surge. It’s going to be a challenge for the LDF as Kunhalikutty is a popular leader and it’s evident from the record number of votes (5.15 lakh) he had secured in the 2017 bypoll following the death of E Ahmed,” says Hamsa Koya, a resident of Cherukkara.

Even in the 2014 Lok Sabha polls, Malappuram stood by IUML giving a record margin victory of 1.94 lakh votes to its candidate E Ahmed.

Mohammed C T of Perinthalmana says, “V P Sanu will put up a good show as people of Malappuram desire change. The LDF stands a chance of repeating the 2004 election victory. But it’s not an easy task considering IUML’s strong base in Malappuram,” he says adding Congress president Rahul Gandhi’s candidature from Wayanad has given a new vigour to the UDF camp. 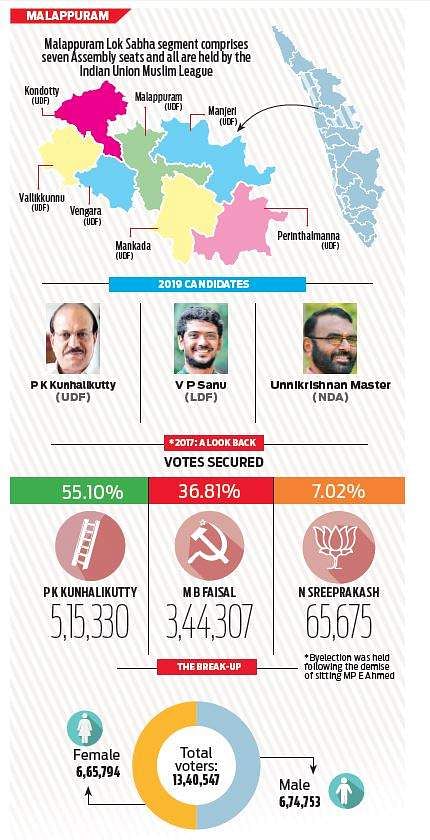