Holding a record for presenting 13 Kerala budgets, Mani has never lost an election in the state Assembly since his first win from Pala in 1965.

KOCHI: KM Mani, who strode like a colossus on the state’s political scene for over five decades, bid adieu on Tuesday after a prolonged illness. The Kerala Congress (M) supremo and the country’s longest-serving MLA, who was admitted to a private hospital here last Friday with chest infection, breathed his last at 4.57 pm. 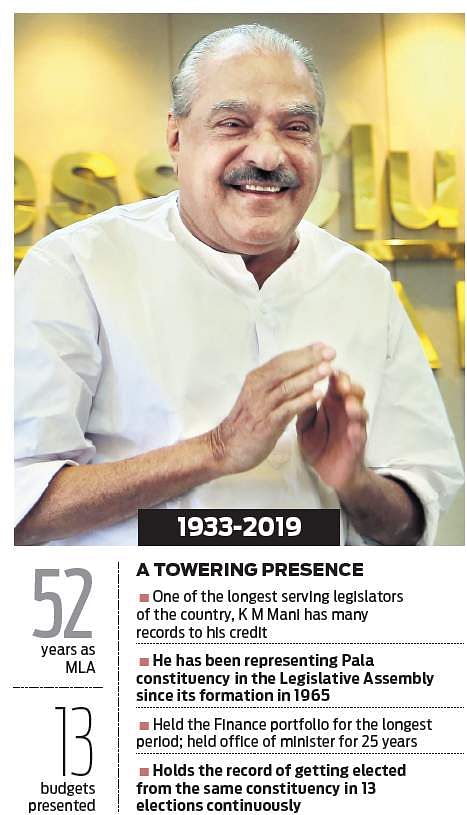 Karingozhakkal Mani Mani, 86, who holds many records including winning all the Assembly elections from Pala since 1965 and presenting 13 budgets as Kerala’s Finance Minister, was known for his astute political moves and his acceptability across the political spectrum.

‘Mani sir’, as he was popularly known, leaves a big void in the Christian-dominated central Kerala where he nurtured the rubber farmers and spice growers. His party has been a key ally of the Congress-led United Democratic Front (UDF) for most part of his political career.

As Finance Minister, Mani launched several welfare schemes for the underprivileged, widows and farmers. The Karunya Lottery Benevolent Scheme, which he introduced, is said to have provided financial assistance to the tune of `1,400 crore for nearly 1.5 lakh poor patients.

Perhaps, his only dream that did not come true was becoming Chief Minister of Kerala, a position which he missed by a whisker at least twice. In 1979 when then Chief Minister P K Vasudevan Nair resigned, Mani was tipped to occupy the vacant chair. Alas, last-minute political moves saw him losing out.

“Mani was a stalwart of Kerala politics. His impeccable electoral record indicated his deep connect with the citizens of the state. His rich contribution to the state will be remembered. Pained by his demise. Condolences to his family and supporters,” Prime Minister Narendra Modi tweeted. Mani leaves behind wife Kuttiyamma, son Jose K Mani, a Rajya Sabha MP,  and five daughters.