After an explosion during fireworks display at Puttingal Temple on April  2016 claimed 111 lives, a ban was imposed on fireworks in the state.

KOCHI: With the Supreme Court granting permission to conduct fireworks display at Thekkinkadu Maidan, as part of the renowned Thrissur Pooram, the Petroleum And Explosives Safety Organisation (PESO) has decided to impose stringent regulations to avoid any eventuality.

A ban was imposed on fireworks in the state after the disastrous explosion during fireworks display at Puttingal Temple in Paravur in Kollam district on April 10, 2016, which claimed 111 lives. The  Thiruvambady and Paramekkavu devaswoms had approached the Supreme Court seeking relaxation of its October 2018 order, which imposed restrictions on fireworks display. 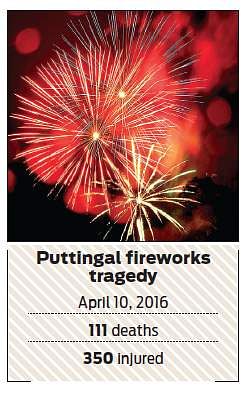 “The organisers can use all firework items approved by the Chief Controller of Explosives. The festival committee should conduct a risk assessment of the site. It should prepare an on-site and off-site emergency plan to avoid any eventuality. We will provide special training for the temple festival committee to ensure the smooth and safe conduct of the Pooram fireworks,” PESO Deputy Chief Controller of Explosives Dr R Venugopal told Express.

“We are yet to receive a copy of the Supreme Court Verdict. All the directions issued by the court will be strictly followed. The quantity of the fireworks used for the display should tally with the storage capacity of the explosives store houses of the two temple committees. As per our evaluation, both the temples have magazines with a capacity of 2000 kg,” he said.

The district magistrate will issue the LE-6 licence to the temples and the PESO will ensure that explosives are not stored beyond the sanctioned limit.

The district police will collect samples of the explosives and the Forensic Science Laboratory (FSL) in Kakkanad will verify the chemical content of the crackers. “If any banned chemicals, like potassium chlorate and Lithium, are found in the crackers, we will initiate action against the temple committee. The district administration will have to ensure that a safety distance of 100-m is maintained between the display site and the spectators,” said Venugopal.

The PESO last year installed a fire hydrant system around the Thekkinkadu maidan to avoid untoward incidents. “We will ensure the fire hydrant system works properly at the time of the display. Mock drills will be conducted in coordination with both the festival committees. All steps will be taken with the support of the state government to ensure that the fire display is conducted in a safe and secure manner,” he said.

Now we are on Telegram too. Follow us for updates
TAGS
Petroleum And Explosives Safety Organisation PESO firecrackers Thrissur Pooram festival