Neo-literates in Kerala rise 15-fold in past two years

KOZHIKODE:  Achieving a major milestone in the state’s 30-year-old fight against illiteracy, the number of neo-literates has recorded a phenomenal 15-fold increase from previous years thanks to specialised projects launched by the Kerala State Literacy Mission Authority (KSLMA) for different sections of society.

While barely 4,200 people embraced literacy in the 2014-16 period, the number of neo-literates in 2017-19 touched 63,544, as per the figures obtained from KSLMA. Half a dozen new literacy programmes
catering to marginalised sections of society are cited to be the reason for the quantum leap.The Aksharalaksham project for basic literacy roped in as many as 42,933 beneficiaries, including Karthiyayani Amma from Alappuzha in 2017-19. The 96-year-old made hit national headlines and became the poster girl of the state’s literacy movement by clearing the exam with flying colours. 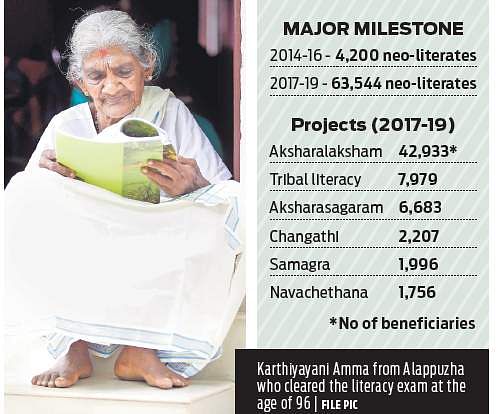 Literacy and equivalency programmes conducted in remote tribal hamlets of Attapadi in Palakkad and in Wayanad made 7,979 people literate. Not confining itself to basic literacy, KSLMA is now imparting class IV equivalency classes to these beneficiaries.

Coastal areas, which were ignored in the state’s literacy initiative – now have 6,683 neo-literates, thanks to the Aksharasagaram project launched exclusively for the fishermen community. The third phase of the hugely successful project is currently under way. While 2,207 migrant workers were made literate through the ‘Changathi’ project, 1,996 people from the state’s tribal areas entered the world of letters through ‘Samagra’ project.

The ‘Navachethana’ project launched in Scheduled Caste colonies made 1,756 people literate.
“The number of people who have enrolled for literacy programmes in 2019-20 is at an all time high. As many as 49,566 people have enrolled themselves for the new academic year,” said P S Sreekala, KSLMA director.

New project
As part of the 1000-day celebrations of the LDF Government, a new project has been conceptualised to impart literacy to 50,000 people in 2,000 most backward colonies.  The survey to identify beneficiaries is in the final stage.As per the 2011 census, there are 18 lakh illiterate people in the state. The numbers climbed steadily over the years as KSLMA was more focused on equivalency programmes. Now, along with basic literacy, projects have also been rolled out to provide equivalency up to higher secondary level.

Now we are on Telegram too. Follow us for updates
TAGS
Kerala State Literacy Mission Authority