Veteran actor Charuhasan was recently quoted as saying Kerala was ‘educated’ enough not to elevate Prem Nazir, one of Malayalam cinema’s biggest superstars, to the Chief Minister’s Office.

KOCHI: Veteran actor Charuhasan was recently quoted as saying Kerala was ‘educated’ enough not to elevate Prem Nazir, one of Malayalam cinema’s biggest superstars, to the Chief Minister’s Office. In the 1980s and 90s, the Prem Nazir story was a staple pointer in newspaper reports to establish how Kerala stood out in the South when it came to the endorsement of matinee idols as political leaders.

When M G Ramachandran and N T Rama Rao, both backed by legions of fans, emerged as invincible leaders and Chief Ministers, Kerala’s own screen icon was a non-starter in politics. It hasn’t been long since celebrities entered the mix in Kerala’s electoral politics. 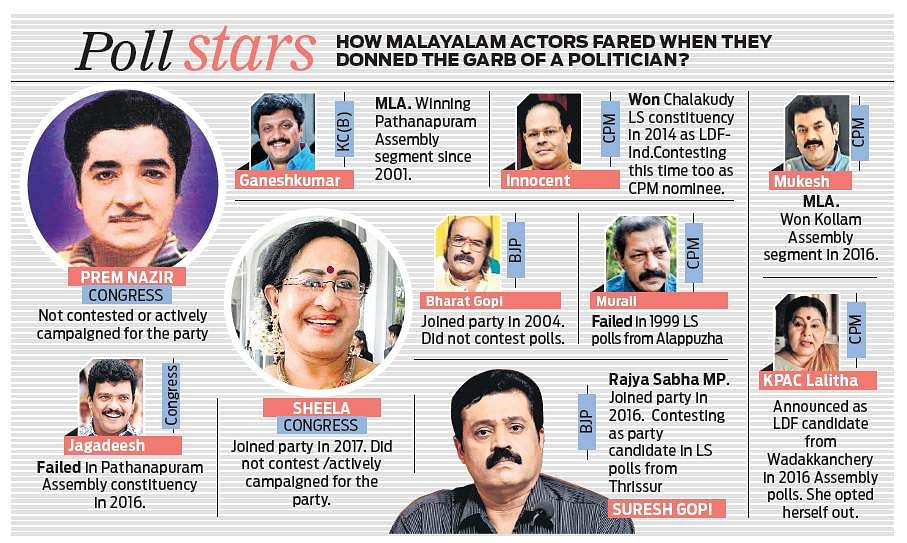 Charuhasan, probably, intended to say personality cult doesn’t ensure big political gains in the state. But with K B Ganesh Kumar, Mukesh and Innocent winning elections (all, of course, backed by prominent political parties), with Suresh Gopi contesting in Thrissur and, with more actors announcing political affiliations, is it time to revisit the sweeping “stars don’t belong here” argument?

“We cannot say Kerala is following the Tamil Nadu trend. Here, the situation is totally different. The film stars/actors who successfully fought elections from Kerala were backed by major political parties. When the LDF fielded Innocent for the first time from the Chalakudy seat, the CPM-led alliance took into account various factors. Likewise, the BJP is trying out a combination of Suresh Gopi and Sabarimala plus his image as a Raja Sabha MP along with the star power, in Thrissur. In Kerala’s context, the star value will only give an incremental advantage,” said film critic C S Venkateswaran.

The television channels came into their own in the late 1990s and early 2000.

This, according to the political observers, helped increase the stars’ popularity. Till the early 90s, politics and cinema were considered two different streams.

“The reaction of stars/actors to certain issues are considered as their stance and also show their political inclinations,” they said.

There was a talk of Mohanlal’s entry into electoral politics ahead of the poll notification.

However, the actor scotched the rumours in this regard. Mammootty’s name also pops up as a candidate during elections. Prem Nazir did not take the plunge despite joining the Congress.

Now we are on Telegram too. Follow us for updates
TAGS
Kerala vote Lok sabha polls 2019 Lok Sabha elections 2019