The CEO only issued a warning against Vijayaraghavan not to repeat such comments, alleged the MLA. 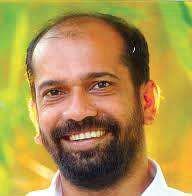 The CEO only issued a warning against Vijayaraghavan not to repeat such comments, alleged the MLA. “It seems Teeka Ram Meena acts according to the orders from AKG Centre. It cannot be accepted. As per the existing norms, if the comments are disrespectful to the womanhood, it should be forwarded to the police. But here, despite finding faults in Vijayaraghvan’s comments, the commission just settled it with a warning,” said Akkara.

Anil has lodged a complaint with the state police chief on behalf of the UDF Alathur parliament committee. He also gave his statement to the town west police station on Friday with regard to his complaint against Deepa Nishanth, Assistant Professor at Sree Kerala Varma College.  In his complaint, Anil had accused Deepa Nishant of insulting Ramya Haridas by mentioning her caste. Deepa’s post criticizing the candidate had invited wide public ire across social media platforms.

Now we are on Telegram too. Follow us for updates
TAGS
Anil Akkara LDF